Snow and optimism in Davos, IBRC and the Quinns back in court, and Red Rock returns 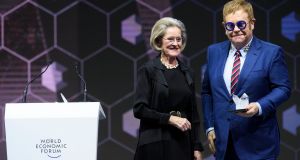 British musician and composer Elton John reacts after receiving a Crystal Award from Hilde Schwab, chairperson and co-founder of Schwab Foundation for Social Entrepreneurship during the Crystal Award Ceremony on the eve of the 48th Annual Meeting of the World Economic Forum in Davos, Switzerland. Photograph: EPA/Laurent Gillieron

Business leaders, politicians and Elton John braved heavy snow in the Swiss ski resort of Davos on Monday as they arrived for the World Economic Forum’s annual meeting. As Joe Brennan reports, almost 60 per cent of chief executives globally believeeconomic growth will improve in the next 12 months, amid a surge in US optimism on the back of Donald Trump’s economic agenda.

A company connected to an advisory firm to the family of businessman Sean Quinn is allegedly behind the “cash extraction” of some $15 million (€12 million) from an Indian company in a number of bogus transactions, the Commercial Court was told yesterday. This is allegedly designed to keep the funds beyond the reach of IBRC, it was claimed. Mary Carolan has the details

In her weekly media and marketing column, Laura Slattery looks at the return of Red Rock to TV3 and ponders on whether current funding structures here make such large-scale television productions viable.