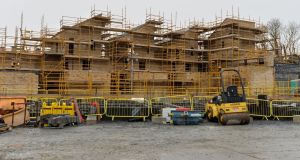 Local councils are paying private developers up to double what it costs them on average to build social housing units directly themselves, according to new figures from the Department of Housing. Eoin Burke-Kennedy reports on data provided by Minister for Housing Darragh O’Brien showing how much local councils paid private developers last year for turnkey properties for social housing tenants, which in several areas, cost almost double the average spent on units developed directly by the council.

Pension savers will no longer be able to access their retirement benefits from the age of 50 under new proposals from Government, which also recommend increasing the normal retirement age for private pensions from 70 to 75, Fiona Reddan reports. It’s the latest of several documents on pensions produced by Government; what can we learn from this one? In her column, Fiona breaks down the key points.

More than two-thirds of businesses in the construction, agriculture, forestry and fishing sectors that usually trade with the UK have not yet registered for customs in advance of Brexit, according to new figures. Revenue Commissioner Gerry Harrahill said there is evidence that some “have not thought through the implications at all”.

The Republic’s unemployment rate has jumped to over 20 per cent as a result of the current Level 5 restrictions to curb the spread of coronavirus. Eoin Burke-Kennedy reports on the latest Live Register data from the Central Statistics Office.

The Irish unit of social media giantTwitter last year recorded pretax losses of €239.69 million, according to its latest accounts, with the loss linked to a €7.9 billion purchase from a connected company for the intellectual property rights to develop and maintain Twitter operations in all countries excluding the Americas. Gordon Deegan has the details.

In pharma news, Irish-founded Trinity Biotech has begun selling its Covid-19 antibody test in the US, and expects to obtain a CE Mark allowing the product to be sold in the European Union shortly, writes Charlie Taylor.

Pfizer’s chief executive Albert Bourla also announced yesterday that a key safety milestone had been reached in the study of its Covid-19 vaccine, and the drug maker is now preparing to seek an emergency-use authorisation from US regulators.