No access to retirement benefits from age 50 under new proposals 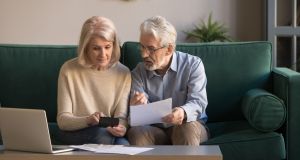 Pension funds typically have to be drawn down by the age of 70, but the new approach would mean a standarised age of 75 introduced. File photograph: Getty

Pension savers will no longer be able to access their retirement benefits from the age of 50 under new Government proposals, which also recommend increasing the normal retirement age for private pensions from 70 to 75.

Savers also won’t be able to invest their pension proceeds in an approved retirement fund (ARF) should the proposals be implemented.

This is according to a new report from the Interdepartmental Pensions Reform & Taxation Group, which includes representatives from the Department of Public Expenditure and Reform, Department of Social Protection and Revenue. The report recommends a more straightforward supplementary pension landscape.

At present, certain pension savers, such as those who have left previous employments, or those with buyout bonds (BOBs), can access some of their pension savings from the age of 50. Others however, such as those in continued employment, or those with personal retirement savings accounts (PRSAs) or retirement annuity contracts (RACs), can only access pension benefits from the age of 60.

Under the new proposals, the age at which people can access their funds will be standardised at 55. This, according to the report, “ would be consistent with increased longevity . . . and aligned with the policy direction of longer working as signalled by the increasing age”.

Similarly, pension funds typically have to be drawn down by the age of 70, but the new approach would mean a standarised age of 75 introduced. This, the report states, would “offer additional flexibility to occupational scheme members to continue contributing to their pension pot for a longer period”, and also is in line with longevity trends.

The proposals also recommend abolishing a number of existing pension structures – including RACs and BOBs – and replacing them with a PRSA, which would, in effect, standardise the features of such products.

Shane Farrell, head of products with Irish Life, said the changes are “eminently sensible” as many of the differences that exist “don’t exist for any good reason”.

“Overall they’re suggesting things that I would have done years ago,” he said. “There is too much arbitrage and anomalies and gaps in our legislation.”

However, he has concerns about the proposed abolition of ARFs (approved retirement funds), noting that it is a “product that has worked quite well”.

ARFs have become the drawdown product of choice for most defined contribution pension savers, given the poor value offered by annuities. With an ARF, a pension saver remains invested into retirement. Data on ARFs from Revenue suggests that there were about 70,000 such funds as of the end of 2019, with assets of some €12.5 billion.

However, the report points to a lack of transparency on charging, “deficient” financial advice and inadequate regulation of ARFs, and suggests replacing them with a whole-of-life PRSA and in-scheme drawdown.

“I don’t think it’s appropriate at retirement for someone to coast into a one-size-fits-all investment,” Mr Connolly said, adding that he has concerns about the reduced investment choice with a PRSA.

The report also recommends abolishing Approved Minimum Retirement Funds, given that recent increases in the state pension renders the requirement to have a guaranteed income of €12,700 redundant.

1 Basic income for all: Has the Covid crisis given us a new economic model?
2 Direct sea routes to Europe offer certainty in choppy Brexit waters
3 Online shoppers face unwelcome tax surprise
4 Kinzen raises $2.2m as it helps clients fight ‘misinformation’
5 ‘I don’t need to do any of this. . .I don’t actually need to work.’
6 Promontoria barred from pursuing doctor over Ulster Bank loan
7 Admission of mistake in Oxford vaccine dose raises doubts over reliability
8 Only way is up for Stripe as valuation skyrockets
9 Fiona Reddan: Who’s afraid of Revolut? Not AIB and BOI it seems
10 Unilever’s Dutch and British arms merge after 90 years ahead of Brexit
Real news has value SUBSCRIBE
Save money on international transfers