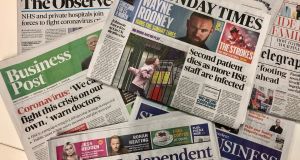 Hospitals are preparing to move patients to alternative facilities from tomorrow to make room for an expected surge of people with Covid-19, as a leading expert predicted that 50,000 people could require critical care during the crisis, according to the Sunday Independent.

It also reports on the social media outcry last night at images of crowded pubs, with the Minister for Health Simon Harris calling it an insult to doctors and nurses, while #closethepubs was trending on Twitter.

Top medics say Ireland needs to follow the lead of countries that have implemented strict measures and controlled the spread of Covid-19, warns the Business Post. It also reports on how business figures from all sectors are calling for Government, banks and Revenue to intervene to avert an economic catastrophe.

Development company Bartra Capital has offered one of its recently developed nursing homes to the HSE – on a not-for-profits basis – for use as a Covid-19 acute care and isolation centre, the paper reports.

The Sunday Times outlines the latest news on virus infections in Ireland and the UK, but also reports that the Isis terrorist group is steering clear of Europe because of the coronavirus. In a new set of Sharia directives, it is now advising members to “stay away from the land of the epidemic” in case they become infected. The paper also carries a first-hand account from the UK’s health minister Nadine Dorries, who tested positive for Covid-19. “The doctor broke the news – I had the coronavirus. And I gave it to Mum.” She details how her mum, 84, started to cough and become flushed as it became clear she had caught the virus.

In the UK papers, the Sunday Express claims the British government plans to order people aged over 70 to stay in strict isolation at home. The Sunday Telegraph says prime minister Boris Johnson has put UK manufacturing industry on a “war footing” to equip the NHS for the battle ahead, with factories to be retooled to make thousands of respirators. The Observer says the NHS and private hospitals have joined forces.

In non-coronavirus stories, the Sunday Times reports that Irish banks are part of an effort to create an app-based instant payment system, dubbed Project Pegasus, aimed at stemming the loss of customers to digital disruptors such as Revolut and Apple Pay.

The Business Post has a story about how the owners of Trinity Street Car Park in Dublin city centre plan to demolish the complex and replace it with a new office block.

Finally, in the same paper, Emmet Ryan tells the story of how “nerds” this week managed to take down one of the biggest cybercrime operations to ever exist – and did so largely without the aid of state-level authorities.