If apartments are not viable, how come we are building them? 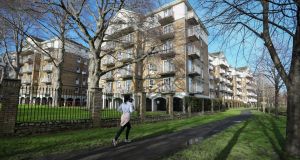 The current trend in apartment building is for developers to sell their schemes as a single job lot to institutional investors. Photograph: Crispin Rodwell

We’re constantly told the solution to housing in Ireland is more high-density development, in other words more apartments and fewer three-bed semis. Problem is, the industry says it cannot deliver apartments, in Dublin at least, for cheaper that €463,000. The figure was contained in a report by Irish Institutional Property (IIP), a lobby group for institutional investors, which assessed development costs across a range of schemes in the city.

At the launch, Brian Moran, managing director of Hines, the US property group behind the Cherrywood development in south Dublin – the largest residential development in the State – said building apartments for the sales market here was no longer “viable” as most people couldn’t afford to buy them. The €463,000 price tag put on a basic two-bed apartment is more than 10 times the average full-time income in the Republic and buyers availing of a 90 per cent loan-to-value mortgage would need incomes in excess of €120,000 to buy.

So apartment building, many people’s answer to the current crisis, is out. Or is it?According to Central Statistics Office figures, released on Friday, planning permissions for apartments jumped 125 per cent to 20,582 last year, eclipsing houses for the first time. Building apartments for the sales market may not work any more but building for the rental market, that’s a different story. Foreign money has flooded into the State to avail of comparatively strong returns from the rental sector. Some €2.4 billion was spent on the private rented sector (PRS) in 2019 and the figure is likely to have been bigger this year. The current trend is for developers to sell their schemes as a single job lot to institutional investors. Critics see the influx of foreign funds as crowding out individual buyers and turning Ireland into a nation of renters. The industry says these schemes wouldn’t have been built if it wasn’t for foreign investors.