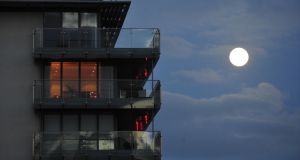 The Irish Institutional Property report puts the cost of delivering a basic two-bed apartment in Dublin at €463,000. Photograph: Aidan Crawley/Bloomberg via Getty Images

The study by Irish Institutional Property (IIP), a lobby group for institutional investors, calculated that the construction costs alone for a two-bed house in Dublin city or suburbs are €158,000.

But this rises to €330,300 when other development costs such as planning, professional fees, finance, VAT, land, levies and equity are included.

For apartments, construction costs are higher at €225,000 per unit due to more onerous structural requirements related to foundations, parking and lift provisions.

When the other development costs are thrown in, the final cost of an apartment in a medium-rise scheme – in a block of five to eight storeys – rises to €463,100. This is more than 10 times the average full-time income in the Republic, currently estimated at €47,000.

The report is based on an analysis of the costs involved in more than 10,000 housing units at various stages of completion in the greater Dublin area, and includes a 15 per cent development margin or profit.

The findings will feed into an increasingly rancorous debate about housing in Ireland and come as the latest official figures show house prices nationally rose at an annual rate of 1.8 per cent in January, up from 0.5 per cent the previous month.

IIP said the findings delivered some “home truths” about the cost of building in Ireland. The group’s chief executive, Pat Farrell, said there was a significant amount of “flawed analysis out there” about the root cause of the current crisis.

“When discussing housing policy, and proposing solutions to the housing crisis, it is important to be aware of the facts,” he said.

“Our report spells out the components of the price of housing, why prices are high, and the costs that need to be tackled to reduce prices for buyers,” Mr Farrell said.

On the high costs of delivering apartments, Brian Moran, managing director of Hines, the US property group behind the Cherrywood development in south Dublin – the largest residential development in the State – admitted that building apartments for the sales market here was no longer “viable” as most people could not afford to buy them.

A first-time buyer availing of a 90 per cent loan-to-value mortgage would need an income in excess of €120,000 to buy at the basic €463,000 price contained in the IIP report.

As a result, most apartment schemes built here are now being sold as a single job lot to private rented sector investors.

Stephen Garvey, the chief operating officer of Glenveagh Properties, said most of the schemes coming on stream would not have been built without institutional investors as the business model involving small-time investors borrowing from banks no longer existed.