Debit card Point of Sale transactions rise by a fifth to €4.8 billion in December 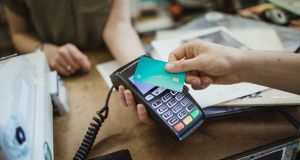 The popularity of contactless payments fuelled a 18.5 per cent rise in the value of debit card transactions in December, a peak shopping month.

Credit statistics from the Central Bank show debit card Point of Sale (PoS) transactions rose by nearly a fifth to €4.8 billion in December when compared with the same month the previous year.

Introduced several years ago, contactless cards are increasingly the norm for small and modest transactions.

In the final quarter of last year, debit cards were used in 305 million individual PoS transactions, with an average spend of €41.53 per transaction.

In comparison, the number of transactions with individual credit cards totalled 42 million, with an average spend of €74.60 per transaction.

The total quarterly value of all card transactions (including ATM transactions) increased by 5 per cent in year-on-year terms to €20.7 billion in the fourth quarter.

Debit card expenditure at PoS and ATM were 5.6 times the value of credit card spending over the quarter.

1 Donohoe’s new role, House of Ireland shuts, and being indispensable at work
2 ‘Sad day’ for House of Ireland as tourism retailer goes out of business
3 ‘My rent here is so low it’s a joke’
4 Paschal Donohoe’s election as Eurogroup president ‘a great win for Ireland’, says Taoiseach
5 The €1 billion market: retailers who serve tourists face double trouble in a pandemic
6 Caveat: The tourism sector deserves to be taken more seriously in this crisis
7 Gardaí raid Irish office of failed German payments group Wirecard
8 Remote working: How to get ahead in a changed world
9 Ryanair accuses ‘screen scrapers’ of blocking refunds
10 Water supply problems are not of Irish Water’s making
Real news has value SUBSCRIBE