Administrators estimate the Belfast-headquartered group has total debts of £45m 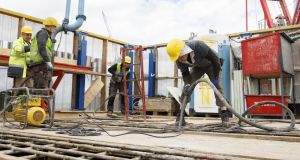 The Lagan Construction Group has 26 other companies which all continue to trade. File photograph: Alex Kraus/Bloomberg

Unsecured trade creditors of the failed Lagan Construction Group, many of them small firms, are owed more than £9 million according to administrators appointed to the Belfast-headquartered firm.

Administrators at KPMG estimate that Lagan Construction Group Limited has total debts in the region of £44.8 million.

Danske Bank, a secured creditor, has one of the biggest exposures to the failed group. It is owed more than £3.9 million and another £24 million in relation to an “intercompany guarantee provided to other Lagan Group companies” for which the failed Lagan Construction Group Limited is “jointly and severally liable”.

In their latest progress report, administrators revealed that Lagan Construction Group Limited had “no cash at bank” when they were appointed in March.

The Lagan Construction Group has 26 other companies which all continue to trade.

According to Mr Hansen and Mr Irwin, the directors of Lagan Construction Group Limited have provided them with a statement of affairs which details that the company had work in progress valued at more than £8.4 million, contract ledger debtors amounting to more than £1.1 million and retentions totalling more than £2.2 million.

The administrators said they have determined that an “asset realisation strategy” is the only feasible option for Lagan Construction Group Limited “with particular focus on investments in subsidies, work in progress, debtors and retentions”.