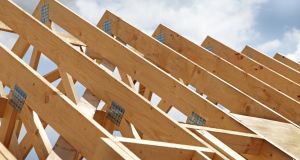 Entekra plans to hire 100 people in the areas of design, engineering, finance, marketing and customer support by the end of the year.

Entekra, founded in 2015 and with operations in California, received the investment from US-based Louisiana-Pacific Corporation, a manufacturer of wood building materials, and some private investors.

The company which provides off-site framing for both residential and commercial construction plans to hire 100 people in the areas of design, engineering, finance, marketing and customer support by the end of the year.

The company suggests its building system offers a “more profitable alternative to the inefficient and often problematic on-site, stick-built construction methods currently used for more than 90 per cent of new-home construction”.

Entekra is led by Gerard McCaughey, who previously founded Century Homes in Ireland before selling it to Kingspan in 2006. Mr McCaughey said the the company, with a specific focus on the US housing market, was aiming to improve the residential construction model in the US.

“The home construction market is the largest and most inefficient industry in the US.

“Entekra’s technology allows us to manufacture energy-efficient homes at speed and scale. It will reduce waste and improve quality of the home construction process,” he said.

Minister for Business, Enterprise and Innovation Heather Humphreys said the decision to invest in Monaghan “showcases the county as a destination for international investment”.

“The creation of 100 high-skilled jobs by Entekra is a significant vote of confidence in the county and the Border region as a great place to do business,” she said.

Entekra chief executive Gerard McCaughey, having sold Century Homes to Kingspan, also previously served as chief executive of Infineco, a consultancy which helped business transition to off-site construction. Mr McCaughey was named “Industry Entrepreneur of the Year” in 2003 by EY.