Builders must hire 112,000 skilled workers over next five years to meet housing and infrastructure needs 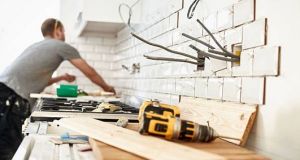 Figures show that 30 apprentice plasterers registered in 2017 compared with 310 in 2006. Floor and all tiling had 46 registered apprentices in 2006, but none last year. Photograph: Getty Images

Builders will need to hire 112,000 skilled workers over the next five years to fill a growing shortage that threatens the industry’s ability to meet demand for housing and infrastructure, a new report shows.

A study by Dublin Institute of Technology for the Construction Industry Federation (CIF) shows that close to nine out of 10 building companies face problems hiring qualified trades people.

The report urges that the Government and industry take steps to change the current apprenticeship system to provide the estimated 112,000 workers that will be needed over the next five years.

The study recommends “zero rating” pay-related social insurance contributions for employers hiring apprentices in trades where there is a dire need. Similarly, it calls for the State to offer grants for apprenticeships in some trades until the shortage has been addressed.

The report also proposes a review of the periods that apprentices spend receiving training off the job.

The study recommends that a forum actively market the construction industry as a viable career to young people.

Dermot Carey, the CIF’s director of safety and training, pointed out that the industry had more than 25,000 apprentices in 2006, before its near collapse two years later.“Today we only have around 3,000 new registrations annually. We have only seven female apprentices in the construction industry.

“The industry is in strong recovery mode and employment is increasing by about 10,000 workers per year, but we are not seeing sufficient numbers coming through the apprenticeship model.”

The so-called “wet trades”, where the work involves materials mixed with water, are amongst the hardest hit. Figures show that 30 apprentice plasterers registered in 2017 compared with 310 in 2006.

In 2006 there were 679 apprentices registered, and but there were just 65 last year.

The report is based on information gained directly from mostly construction employers.

1 What is Covid Tracker Ireland?: New HSE app explained
2 British holiday home rental company exits Irish market
3 Central Bank considers legal action over Covid-19 insurance cover
4 Ireland’s economy forecast to shrink 8.5% due to Covid-19 pandemic
5 Will family’s tax debt stop me getting my inheritance?
6 Avolon cancels orders for 27 Boeing planes
7 Why gift a son now if it eats into his tax-free inheritance threshold?
8 Federal Reserve official warns US recovery may be ‘levelling off’
9 Shannon Airport workers reject 20% pay cut
10 How to save money while helping to save the planet
Real news has value SUBSCRIBE