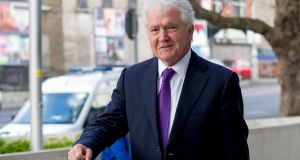 Former Anglo Irish Bank chairman, Seán FitzPatrick has made a fresh attempt to secure planning permission for a new home near Greystones in Co Wicklow.

Mr FitzPatrick and his wife Catriona FitzPatrick have lodged an appeal to An Bord Pleanála against last month’s decision by Wicklow County Council refusing planning permission for their proposal at Meadow Garden, Farm Lane, Greystones.

The FitzPatricks had lodged revised plans for the home in June but they were refused by the council after it concluded that the new home had the potential to result in new and significant overlooking of neighbouring properties.

The council said overlooking concerns arose particularly from the proposed home’s first floor terraces and their proximity to the boundary.

The revised plans were lodged on behalf of the FitzPatricks to demonstrate that their development would not have a significant impact on the residential amenities and privacy of adjoining properties.

The planning authority refused permission after one objecting neighbour, Fintan Graham, told the council that it is with regret “that I find the resubmitted plans fail to address the significant impact of the build on the privacy and consequent negative impact on the amenities of our adjoining property”.

The council planner in the case stated that she was not satisfied that the revised plans adequately addressed the concerns of the planning authority with respect to the potential impact of the proposed development on the amenities of adjoining properties.

She stated: “In particular I am not satisfied that the applicants have demonstrated that new overlooking will not result from the proposed first floor terrace areas and given the proximity of the proposed terraced areas to adjoining properties, in particular Rosella to the west, it is not considered that the provision of additional planting along the site boundary would be sufficient.”

The council refused planning despite planning consultant for the FitzPatricks, Kevin Hughes of Hughes Planning and Development Consultants arguing in his submission to the council that “the appropriately scaled development will not give rise to any undue impacts on the amenity of any adjacent properties”.

The FitzPatricks made a number of key revisions to the proposal to address the privacy concerns including the introduction of 1.8 metre high hedging and the planting of six pre-mature yew trees along the boundary separating the home from neighbours’ properties.

The Hughes planning report points out even without the revisions being made, there is already limited visibility of adjoining neighbours’ properties to the east and west.

The new FitzPatrick home was to replace a single-storey, fire-damaged dwelling known as Meadow Garden.

The FitzPatricks held on to their home, Camaderry, next to Greystones Golf Club after Mr Fitzpatrick was declared a bankrupt in 2010 with debts of €147 million and assets of €47 million in the wake of the collapse of Anglo Irish Bank.

In May 2017 Mr FitzPatrick was acquitted on criminal counts of allegedly misleading Anglo’s auditors about tens of millions of euro in loans concealed from the public between 2002 and 2007.

He resigned as chairman of the bank in December 2008, almost a month before it was nationalised, after the true extent of his loans, amounting to around €122 million, were disclosed by the bank.

The appeals board is due to make a decision on the appeal in December.