Permission has been granted for 107 new build-to-rent apartments 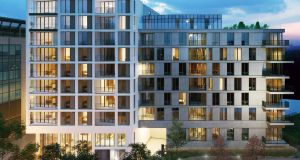 An artists impression of the development at Dundrum Town Centre.

Dundrum Town Centre part owner Hammerson has received planning approval for 107 new apartments at the south Dublin shopping centre which will ultimately be offered to the rental market.

Hammerson said on Friday that An Bord Pleanála has approved the scheme, marking the company’s first move into residential development in the Republic.

It has not said how much the development, located above the red car park on the Dundrum Town Centre site, is likely to cost. Goodbody analyst Colm Lauder estimates the apartments will cost about €28 million to build. On completion, they will have a gross capital value of €64 million, Mr Lauder said.

The development will deliver 50 one-bedroom and 56 two-bedroom apartments which will be managed on a long-term rental basis. The scheme will also include amenities such as a co-working space at ground-floor level, a gym, cinema room, lounge and terrace at the upper levels.

Additionally, the developer will add exterior courtyards and terraces which will include seating areas.

This development is unrelated to a larger scheme being planned by Hammerson. The company is in the process of developing a master plan for a residential-led scheme on its phase two land to the north of the shopping centre.

Construction work for the development is expected to start next year. Hammerson is leading the development on behalf of its 50:50 joint venture with Allianz which owns and operates the Dundrum Town Centre.

1 Boeing identifies new software flaw in grounded 737 Max
2 Dublin housebuilder records €11m gain after striking deal with bankers
3 ‘Life in Vilnius reminds me of Ireland in the 1990s’
4 Real price of cheap credit? Unaffordable homes
5 Election adds to headaches for AIB boss Colin Hunt
6 Irish people like nothing more than being bribed with their own money
7 Budget 2020: New emissions tax on new cars and used imports
8 Hogan warns Britain on US trade deal as EU set to impose tariffs
9 GoMo is being investigated by advertising authority
10 Barclays to cut 100 senior roles as lender seeks to rein in costs
Real news has value SUBSCRIBE