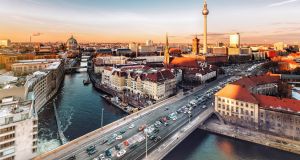 Rents in Berlin were for years lower than rents in other major European cities, but they have more than doubled since 2008. Photograph: iStock

Berlin’s city legislature approved on Thursday a bill that freezes rents in the German capital for five years, it said on its website.

Shares in property companies with assets in Berlin were down slightly on the news.

The law imposes a freeze for five years from June 18th, 2019, with the possibility of an inflation-related increase of about 1.3 per cent allowed from 2022 and limited increases allowed to pay for modernisations. The rules also apply to subletting contracts.

Rents in Berlin were for years lower than rents in other major European cities, but they have more than doubled since 2008 as around 40,000 people a year moved to the German capital, where some 85 per cent of residents rent rather than own homes.

Opponents of the rent freeze say the policy could worsen Germany’s housing crisis by scaring off property investors eager to build in urban centres.

Berlin’s city senate is run by a coalition headed by the social democrats that includes the Greens and the Left party.

An industry association representing 200 companies with 20,000 workers in five eastern states including Berlin said the bill was counterproductive and could result in job losses in the sector.