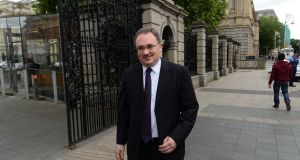 The Government has told Brussels officials that Nama’s plan to fund the construction of 20,000 starter homes in a bid to help tackle the housing crisis does not breach EU rules on state aid.

Builders have complained to the European Commission that the Budget 2016 proposal that the agency finance the construction of new homes on some of its sites is illegal state aid.

It is understood the Department of Finance has told the commission’s competition law directorate that, as Brussels approved Nama’s establishment in 2009, the housing plan does not break the rules.

Before setting up the agency, the Government had to ask the commission to clear it on state aid grounds.

The department believes that, as Nama’s housing plan does not go beyond the powers originally given to the organisation, it does not constitute illegal state aid.

Nama’s plan will involve the agency lending money to developers to build 20,000 affordable homes over five years on sites that it controls. Its chairman, Frank Daly, and chief executive, Brendan McDonagh, have already said publicly this would be done strictly on a commercial basis.

Nama has not commented on the complaint. The Department of Finance recently confirmed that it had contact with EU officials but added that it would not be appropriate to comment on an ongoing process.

1 How long can Government afford to keep State pension age at 66?
2 Guinness brings out a non-alcoholic version of the black stuff
3 How much will a Covid-19 vaccine cost?
4 How on earth do we the calculate the cost of Level 5 for the Irish economy?
5 Irish start-up Wayflyer raises €7.8m in seed funding
6 Gap looks at closing Irish stores
7 Ulster Bank tells ‘deeply concerned’ Minister no decision yet on future
8 Paul Coulson plans record $1.8bn Ardagh investment
9 Level 5 closures, fall in GDP, Aldi toy rush and struggling borrowers
10 Learner drivers could pay €600 more in insurance due to test delays
Real news has value SUBSCRIBE