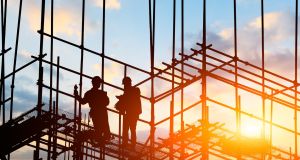 Construction on Tetrarch’s site is due to begin later this year with completion expected late in 2020. Photograph: iStock

Tetrarch Capital, a Dublin-based real estate investor, has received planning permission for a significant construction project in Dublin city centre in which it plans to invest some €80 million.

Plans for a 393-bedroom budget hotel, a 202-unit aparthotel, a large ground floor restaurant and an apartment block with 21 units were approved this week.

An Bord Pleanála upheld the decision of Dublin city council to grant permission for redevelopment of the 0.4 hectare site bound by Moss Street, Gloucester Street and Townsend Street in Dublin 2.

The scheme had been delayed following an appeal of Dublin city council’s September 2017 decision by the board of management of City Quay National School.

Construction on the site is expected to begin later this year with completion due by late 2020. On completion, all of the 21 apartments will be handed over to Dublin City Council and are expected to be used for social housing.

“We’re very pleased with An Bord Pleanála’s decision to uphold the decision of Dublin City Council to grant planning permission for what is a really exciting scheme on a superbly located site in the heart of the city centre that is ideal for the provision of much needed aparthotel and budget hotel accommodation,” said Michael McElligott, chief executive of Tetrarch Capital.

Tetrarch has already agreed a long-term lease on the aparthotel development with Staycity, which is also leasing the company’s 142-unit aparthotel on nearby Mark Street.

While it is as yet unclear what the branding of the eight-storey hotel designed by MCA Architects will be, the company’s planned 158-bedroom budget hotel at Sackville Place will be a Moxy Hotel. Moxy is a budget brand developed by Marriot in association with Ikea.

Formed in 2011, Tetrarch has assets under management of €450 million, with accommodation extending to over 2.5 million sq ft. Included in its portfolio is Ireland’s largest hotel, the Citywest Hotel.