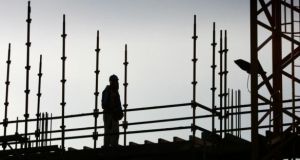 The State will not be able to deliver on ambitious housing and infrastructure targets unless more is done to encourage workers who left Ireland during the recession to return home, the Construction Industry Federation (CIF) has warned.

The body said close to 120,000 construction workers are now required in order to meet targets outlined in the National Planning Framework (NPF). The strategy, which aims to manage an anticipated population growth of one million people over the next 20 years, was launched in February with an accompanying 10-year infrastructural plan.

While describing the strategy as a “game-changer” for the Republic, CIF director general Tom Parlon said its success was contingent on there being enough workers available to complete projects.

CIF had previously estimated ahead of the launch of the framework that at least 112,000 additional employees would be needed up to 2020 to deliver on various projects. It says with more projects being added the sector must work even harder now to attract more people.

“A failure to attract people into the industry, both onsite and offsite, will see labour costs increase and eat away in the available capital for investment in vital infrastructure,” said Mr Parlon.

“I want to give a stark warning here, if we do not start to address this issue now, the housing and infrastructure crisis will not be solved before 2025,” he added.

More than 220,000 workers were employed in Ireland’s construction sector during the Celtic Tiger years, a figure that fell by more than 150,000 during the recession. Currently there are about 134,000 people now employed in the sector.

CIF said that people have been hired at a rate of about 1,000 a month into the sector over the last four years. However, Mr Parlon warned that with about 100,000 construction workers having emigrated in the downturn it is proving increasingly difficult to source staff.

“We believe that the numbers of people we can reactivate from the live register is nearly spent. We are now turning to the diaspora as a rich source of skilled labour that we need to tap into over the coming years to help us meet Ireland’s demand for construction activity,” said Mr Parlon.

Mr Parlon said the construction industry has made a significant recovery over the last few years with wages and conditions improving significantly.

“Construction has emerged from the economic downturn a more nimble, modern, and sustainable sector. We learned some very hard lessons throughout the recession and I believe the industry has improved drastically as a result,” he said.

“Ireland is facing a growing need for talent and skills in construction and while concerning, this is a very good news story for those abroad with construction experience and trades, who may be thinking of coming home. Now is a very good time to re-enter the industry, there are lots of opportunities available,” Mr Parlon added.

1 Opioid executive admits to ‘no morals’ ahead of prison term
2 Are there annual limits on inheritances or gifts to a child?
3 NI house builder apologises to Harry and Meghan over adverts
4 Who are Ireland’s 17 billionaires?
5 Volvo warns of scaled back car line-up if UK splits from EU rules
6 Little strategic thinking in election manifestos of Fine Gael and Fianna Fáil
7 US threatens retaliation against EU over proposed carbon tax
8 CPL founders Anne Heraty and Paul Carroll in line for €1m dividend payout
9 Help, I’ve no PRSI stamps – can I still get a pension?
10 South Dublin Credit Union members urged to borrow more to ensure survival
Real news has value SUBSCRIBE