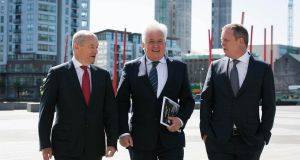 Housebuilder Cairn Homes has announced that group finance director Tim Kenny is to leave his role in January to take up a new senior management position in a private Irish company.

In a note to investors on Friday, the company said Mr Kenny would continue to work closely with chief executive Michael Stanley and his management colleagues on a number of key projects over the coming months.

He will also work to ensure a “seamless transition to his successor”. A process to recruit a new group finance director will begin immediately.

Mr Kenny was previously group finance director and group business development director (2005 to 2017) of the Musgrave Group, which is Ireland’s largest grocery and food distribution business.

Cairn Homes chairman John Reynolds said: “Tim has made a significant contribution to the evolution of Cairn during his time as group finance director. We are sorry to see him depart for pastures new and he does so with our best wishes.”

Mr Stanley said he was pleased to have worked with Mr Kenny and would focus now on identifying a strong successor.

“Tim’s role in establishing a strong finance function in the group has been invaluable,” he said.

“I am pleased to have had the opportunity to work closely with him and benefit from his professionalism and his counsel. We remain focused on building on the success achieved by Cairn to date and on securing a strong successor to Tim.”

Cairn owns a 15,100 unit land bank across 32 residential development sites, 90 per cent of which are located in the general Dublin area with public transport and infrastructure links.

It is today building on 15 sites in the general Dublin area, which will deliver over 5,250 new homes.