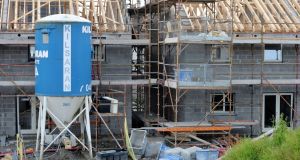 Irish construction activity accelerated in September, though the rate of job creation across the industry pulled back from elevated levels in previous months. Photograph: Alan Betson

Irish construction activity accelerated in September, though the rate of job creation across the industry pulled back from elevated levels in previous months, according the latest monthly Ulster Bank health check of the sector.

The Ulster Bank Construction Purchasing Managers’ Index (PMI) expanded to 56.5 in September from 55.1 in August, according to the bank. A reading above 50 per cent indicates expansion in activity.

“The latest results of the Ulster Bank Construction PMI survey showed that construction activity re-accelerated in September, halting a three-month sequence of deceleration from the exceptionally rapid growth record in May,” said Simon Barry, an economist with Ulster Bank, nothing that the picture across various parts of the industry was “mixed” last month.

“Housing activity continued to grow strongly and at a pace similar to that recorded on average during the 2004-06 pre-crisis period, albeit that the pace of expansion moderated from August.”

The index reading for housing activity dipped to 56.1 from 57.4 for August.

Figures from the Department of the Environment suggest that almost 15,000 homes were completed last year, up 18 per cent on 2015, although this number is likely to overstate the total as the data is taken from new ESB Connections.

Civil engineering continued to underperform, with the Ulster Bank index for this component of activity coming in at 48.5 in September, albeit marking an improvement from 43.5 for the previous month, though still a contraction of business in that sector.

“Employment and new business levels continued to rise solidly in September though at a somewhat slower pace than the very rapid rates recorded over the summer months,” said Mr Barry.