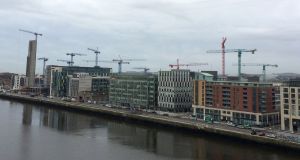 Nearly two-thirds of Irish-based construction firms have reported difficulties in securing bank finance in the past year, according to a survey by accounting firm RSM and the Construction Industry Federation (CIF).

Among companies with a turnover of less than €9 million, the figure rises to 70 per cent, the survey found.

It also suggested that many companies have resorted to funding investment via cash reserves, which limited their growth ambitions, potentially stalling increased activity in the sector at a time of acute housing shortages across the State.

The dearth of bank credit for SMEs, particularly those in the construction sector, has been one of the abiding legacies of the crash.

The survey also highlighted a regional disparity, with respondents reporting that projects outside of Dublin were also being considered less favourably.

“This report should ring warning bells for Government because it clearly shows that construction SMEs across all subsectors in the industry are still reporting difficulties in securing funding for viable projects,” Tom Parlon, director general of CIF, said.

“The implications for Irish society are worrying as these companies need to be supported to be in a position to address Ireland’s housing and infrastructure crises.”

He said the availability of finance was now dictating what type of construction occurs.

“Where finance is available, in sectors such as commercial, student accommodation, or in the Greater Dublin Area, construction is occurring.

“The private sector hasn’t failed, where it can access finance it is delivering, but there is a market failure in the availability of finance for viable construction projects,” Mr Parlon added.

To counteract the apparent Dublin bias, the federation is calling for the establishment of a national infrastructure commission to support objective decision-making in government and to root out political bias.

However it is also fearful that turning up expenditure on its capital programme too rapidly may push up wages and prices and ultimately overheat the economy as it converges on full employment.

The Economic and Social Research Institute last week warned that the Government may soon need to consider raising personal taxes to counteract the inflationary pressures associated with a major uptick in capital spending.