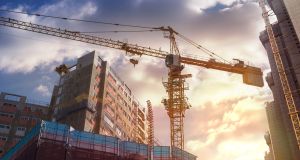 Residential capital spending in Dublin rose 23 per cent to €7.5 billion last year and represented more than 52 per cent of the overall market. Photograph: iStock

Spending on residential property rose by 24 per cent to €14.4 billion last yearwhile investment on commercial property fell, a new report has found.

The breakdown of residential versus commercial investment bucks the trend between 2014 and 2016, where capital spend on residential was around 67 per cent of the total property spend.

The overall spend across both property types only increased 1 per cent to €17.9 billion, the report says. The relatively small percentage increase comes after the volume of capital deployed on commercial transactions dipped almost 43 per cent. The report flagged 2016 as an “exceptional year” and noted that Dublin absorbed 67 per cent of the investment.

But it also said anecdotal evidence is suggesting investors are becoming increasingly comfortable with the regional commercial market on the back of strengthening regional economies. Over €266 million of commercial properties were transacted in Cork in 2017, compared to €111 million the previous year. In Galway, activity rose by 15 per cent, resulting in €107 million worth of deals completing.

The picture in residential showed investment in every county increasing, with double digit growth recorded in all but three counties.

Capital spend in Dublin rose 23 per cent to €7.5 billion and represented over 52 per cent of the overall market. With €1.3 billion transacted, Cork was the second strongest county in terms of activity. Meath, Wicklow and Kildare also recorded strong annual growth rates of 55 per cent, 30 per cent and 28 per cent respectively.

“Commercial investment alone for the first half of the year is significantly higher than the same period last year. Notably, led by a number of larger value transactions and an uplift in overall development land transactions, the commercial property market looks set to exceed 2017’s performance,” she said.

Growth in residential is also forecast to continue this year with a 12.5 per cent uplift already recorded in the volume of home purchases annually to the end of the first quarter.

Given the ongoing supply constraints in the Republic’s residential market, the report flagged as a positive the fact that around 50,800 transactions were recorded on the property price register last year, an increase of 14 per cent on 2016.