My mortgage is fixed – but can I still switch?

The answer is yes, but if you are faced with a penalty, the decision on whether or not you switch to a lower cost product will depend on how much you will save by doing so 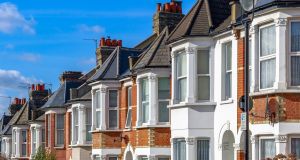 If you fixed a number of years ago, the savings available with a switch to one of the rates now on offer might be considerable

Mortgage rates are finally falling, bringing Irish homeowners closer (if not close enough) to the rates enjoyed by their European peers.

Ulster Bank recently announced a market-beating rate of 2.3 per cent, fixed over two years, while KBC Bank has a one-year fixed rate of 2.9 per cent.

While this is still not as good as rates on offer elsewhere – in France, for example, lucky homeowners can lock into rates of as low as 1.6 per cent, fixed for 20 years – at least it’s going in the right direction.

If you’re on a low tracker rate, you won’t interested in switching, but if you’re on a variable rate, there is nothing to stop you doing so, so get moving!

But what about if you locked into a long-term fixed rate some time ago? Are you destined to look on enviously as rates continue to fall. What can you do?

If you fixed a number of years ago, the savings available with a switch to one of the rates now on offer might be considerable. Back in 2014 for example, you could have fixed your mortgage for 10 years with Bank of Ireland at what now seems a scary 4.99 per cent (though, of course, things could be different by the time it matures in 2024).

You can still benefit, even if you’re not willing to switch lender. While your own lender’s fixed rates will likely have fallen, you might be able to do even better. Rising property prices, combined with the amount you will have paid down on your loan, mean that your loan-to-value (LTV), or the proportion of your loan compared to the value of your property, is now lower. That means you might be in line for a considerably better offer with your own lender.

As Joey Sheehan, head of credit at Mymortgages.ie, points out, mortgage holders in areas of rising property prices should find out what their current LTV is by calling their lender to see how much is outstanding on their loan and using this figure in conjunction with the current value of their house.

The savings might be clear, but the trouble for those who have locked into an expensive longer-term fixed rate product is trying to get out of it. Typically, while you are entitled to overpay a fixed rate mortgage by a certain amount each month, if you choose to break before the end of the term, you may still face a penalty fee, often known as an early redemption charge.

This is determined by the bank and takes into account factors such as the interest rate, your mortgage outstanding and the length of time you have left in your fixed rate period.

However, new rules, introduced as part of new European Union mortgage regulations back in 2016, provide a new statutory framework on how lenders must operate – and crucially, mean that banks can only recoup what they might lose by allowing you exit the fixed rate contract. They can’t charge you any additional penalties.

When it comes to break charges on fixed rate contracts, the regulations state that lenders are entitled “to fair and objective compensation, where justified, for possible costs directly linked to the early repayment” . This means lenders can’t impose a sanction on the consumer, and the charge borne by the consumer should “not exceed the financial loss of the creditor”.

The regulations state that, when asked, lenders must give a consumer “without delay” the cost of the possible penalty “on paper or another durable medium”. It also states that any assumptions used must “be reasonable and justifiable”.

Lenders operating in Ireland must also abide by the requirements of the Central Bank’s Consumer Protection Code 2012. This means that lenders must include, within the loan documentation, a worked example, specific to each individual customer, showing how an early redemption charge is calculated and how much it might be.

Well, that’s the million dollar question and, unfortunately, there is no one simple answer. How much you owe will depend on your own particular mortgage, as well as which lender you borrowed from.

The good news is that break charges may now be less than they were prior to the introduction of the 2016 regulations.

As a spokeswoman for Bank of Ireland points out, the funding fee or break charge is compensation for the additional interest expense that the bank may incur as a result of a customer breaking their fixed rate contract.

“If there is no additional interest expense incurred by the bank, no compensation will be required,” she says, adding that, given how the bank calculates its fixed rates, “it is possible that some customers would not have incurred fixed rate break fees”.

AIB is also keen to stress that, as per European regulations, “it does not make any profit or gain from the application of breakage costs to customers”. Again, this may mean that at AIB “ a zero break charge is possible”.

According to Brendan Burgess, of the consumer forum Askaboutmoney.com, what is key to how most banks now work out a break fee is the inter-bank rate. This means that “the bank isn’t losing anything by allowing you to break out of it”. That means that “a lot of people now find that there is no break fee in many cases”.

“Everybody should be checking; most people don’t have the energy or the time or understanding to switch from one bank to another, but this is a relatively simple process. You can just break out and fix again at a lower rate,” says Burgess.

This is fine in theory but the fact remains that many homeowners will still find that their bank is burdening them with a break charge.

Ultimately, it is a case of doing the sums. The amount charged by your lender to break the fixed-term contract can vary substantially. But, as our table shows, the savings can be substantial in switching from a higher fixed rate to a lower one.

We asked all the main banks how much of a break fee they would impose on a €230,000 mortgage (see table). The answers we got back ranged from a low of €1,500 to a high of over €2,250. And, interestingly, figures at both extremes came from one bank – AIB. The former is for its subsidiary EBS and the latter for customers of the bank itself.

A spokesman for AIB says that both AIB and EBS apply different approaches when calculating break charges. This this is due to “their backgrounds as independent entities in the market”.

So, for example, AIB considers the difference between the interest rate at the time the product was taken out, and when it is being broken, while EBS looks at the difference in the cost of funds.

But AIB is not quite the highest. Ulster Bank would charge a fee of €2,253.04 in our example. It bases its charge on either the cost of funds applicable at the time of the original fixed mortgage, compared with now, or six months interest, “whichever is lower”.

KBC Bank did not provide an answer to the specific question.

Should I still break my contract?

Given the scale of some of the break charges, homeowners might be put off at the thought of breaking a contract and switching to a lower rate.

However, a homeowner on a €230,000 mortgage at 5 per cent will be repaying about €1,200 a month, so the savings to be made can still be significant, depending on the amount of time to run on the current higher rate fixed term, as dropping to a 3 per cent rate will save them about €250 a month, or €3,000 in the first year.

If you are faced with a penalty, the decision on whether or not you pay up and switch to a lower product will likely depend on a quick cost-benefit analysis.

If, for example, your break charge is €1,000 but your savings in the first year will be €2,000, it makes sense to break. On the other hand, if your savings are only going to be €800 and you only have one year left on the current fixed rate, it may make sense to stick.

Banks will sometimes give you the option of paying the penalty by adding it on to your mortgage – but you might save money by paying it in full now.

“I would say if you have the money to pay the break fee, you should pay it,” advises Burgess.

For some people, the thoughts of verifying the calculation offered by their bank can be confusing. “It is difficult, most ordinary people wouldn’t be able to verify it,” agrees Burgess.

If you do have any concerns about how your bank may be calculating a fixed rate break fee, the Central Bank suggests you contact the regulator.

“The Central Bank welcomes all information which will assist it in fulfilling its objectives of regulating financial service providers and ensuring that the best interests of consumers of financial services are protected,” a spokesman said.

1 Aer Lingus confirms job cuts due to ‘decimation in demand’
2 Why is Germany suddenly embracing its inner Keynesian?
3 Passengers face queuing in car parks at Dublin Airport
4 Major credit union plans to limit savings accounts to €40,000
5 Prospect of foreign travel highlights remaining restrictions here
6 Avoca wins battle with Monkstown locals over cafe operation
7 Cycling made easier with an Irish-made electric bike
8 In six months we will be in the grip of a 1980s-style recession
9 ‘The recovery needs to be a full-scale economic renewal’
10 AstraZeneca targets two billion doses of coronavirus vaccine
Real news has value SUBSCRIBE
Save money on international transfers