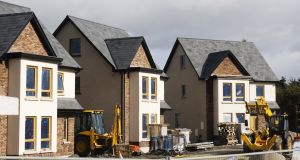 The volume of sales in Northern Ireland increased 3.1 per cent in the second quarter compared to the same period in 2017. Photograph: iStock

Property prices in Northern Ireland increased at an annualised rate of 6.2 per cent in the second quarter of the year, with the average price reaching £162,215 (€181,225).

“There are a number of factors that support this sustainable growth, including continued affordability in comparison to the majority of UK regions, availability of new homes within the first-time buyer market and low levels of unemployment, with wages starting to gain on inflation throughout 2018,” said Michael Boyd, deputy chief executive of Progressive Building Society.

With house price increases running around three percentage points above UK inflation, the report indicated that estate agents’ perceptions are “reasonably positive” with continued demand for housing. Sales volume in the period grew 3.1 per cent.

While the figures indicate a “relatively healthy residential housing market”, according to Karly Greene, head of research at the Northern Ireland Housing Executive, economic and political uncertainty and the rise in interest rates in the UK mean “ongoing monitoring will be particularly important”.

1 Ireland has EU’s most progressive tax system, study finds
2 Who are Ireland’s 17 billionaires?
3 Financial payments group Planet in rumoured €1.98bn sale
4 Fallon & Byrne gets permission for extension in Exchequer Street
5 Are there annual limits on inheritances or gifts to a child?
6 Doomsday Clock counting down remaining time left for civilisation
7 Tech giants step up lobbying in Washington
8 Davos Diary: UCD prof goes batty, Ivanka hits town and Prince Charles takes the stage
9 Fianna Fáil may have just pressed the pause button on the property market
10 Are you a Monica, Joey or Chandler when it comes to your data privacy?
Real news has value SUBSCRIBE