Fewer houses will be built due to price slowdown, economist says 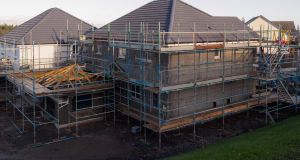 Goodbody’s Dermot O’Leary believes 21,000 houses will be completed this year, down from an earlier forecast of 22,000. Photograph: iStock

Fewer new properties will be built this year than previously expected on the back of a slowdown in house-price growth, a plateau in mortgage approvals, an increase in new stock for sale and an increase in build costs, a leading economist has said.

Goodbody chief economist Dermot O’Leary said he believed 21,000 houses will be completed this year, down from an earlier forecast of 22,000, as a result of pressures in the housebuilding industry. The forecast comes despite many commentators estimating that since the onset of the recovery the Republic has needed between 30,000 and 35,000 new houses each year.

Mr O’Leary’s assessment stems from weak growth in house prices compared to previous years and he reduced his forecast for house price inflation this year to 3.6 per cent.

He noted that uncertainty surrounding the extension of the Government’s help-to-buy scheme and the limited scale of housebuilders meant that fewer properties will be completed this year.

Last year saw 18,023 new properties completed while prices rose 6.3 per cent nationally over the course of the year. And while the growth trend has largely continued into the first quarter the volume of completions are expected to soften.

Additionally, the small size of Irish housebuilders has caused concern for Mr O’Leary, who noted that only 16 builders last year sold more than 100 units. “Funding and the lack of scale are two of the major issues that will curtail growth in supply in Ireland, ” Mr O’Leary said. “Of the top 10 builders, we estimate that three are at least partly funded by Nama,” he added.

Goodbody’s latest quarterly Irish Economy Health Check suggested that the Government may have to extend the help-to-buy scheme beyond the end of this year to achieve its policy goals on housing supply and promoting home ownership.

“Uncertainty around the extension of the help-to-buy scheme will likely reduce commencements in the latter half of the year and feed through into slower than expected completions next year,” said Mr O’Leary. “Many factors are at play, but now is probably not the right time to close the scheme.”

Build-to-rent, too, is likely to become an even bigger feature of the property landscape with Goodbody noting that at least 4,596 build-to-rent units were in the planning process through the first week of May 2019, “a 53 per cent increase from 2018 in less than half the time”.

Nevertheless, Mr O’Leary wrote that the Brexit threat “looms large” while the prospect of a hard-Brexit has risen substantially.

“This would be the worse-possible outcome for Ireland and alter the short-term trajectory of the economy significantly. The ESRI suggests a short-term hit of 2.4 per cent of GDP, but we suggest that the risks are to the downside here,” he noted.