DPP warned TD about his tweets during Jobstown trial

Solidarity’s Paul Murphy tweeted from courtroom, including during judge’s charge to jury 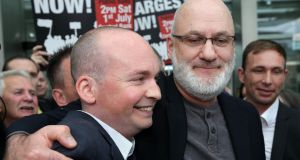 The Solidarity TD Paul Murphy was warned by the Director of Public Prosecutions (DPP) earlier this week about using his Twitter account to comment on the Jobstown trial.

The Dublin TD, who has 14,300 followers, subsequently deleted the tweets and retweets he had published concerning the trial.

Mr Murphy published tweets during the trial from the courtroom, including during the charge from Judge Melanie Greally to the jury on Monday.

Mr Murphy and the other five accused were found not guilty by unanimous decisions of the jury yesterday, after the jury had deliberated for about three hours. They had pleaded not guilty to charges of falsely imprisoning former Labour Party leader Joan Burton and her then assistant, Karen O’Connell, in Jobstown, Dublin, in November 2014.

On Wednesday counsel for the DPP, Sean Gillane SC, speaking in the absence of the jury, told Judge Greally that it had been brought to the prosecution’s attention that Mr Murphy had been publishing tweets and retweets on Monday that involved republishing comments from others that contained “pointed references to evidence heard in the trial”.

Publishing commentary on a case before a jury can constitute contempt of court. On Monday afternoon, Mr Murphy, while the judge was addressing the jury, published a tweet noting that #JobstownNotGuilty was “trending number 6 in Ireland. Thanks everybody, keep it up!”

Fifteen minutes later he retweeted a comment which referred to the judge’s then ongoing summing up, and included a reference to some witnesses’ testimony. The comment cannot be reproduced for legal reasons.

Mr Gillane said he understood steps had been taken to delete or take down the relevant material during Tuesday. The judge said if Mr Murphy had been advised of the potential consequences of engaging in these sort of tweets, at this point in the trial, she would say no more.

A substantial social media campaign has been run for the past two years about the trial and on Thursday Mr Murphy said the case had been won both inside and outside the courtroom.