Even as CRH shuns Trump’s border wall, others line up 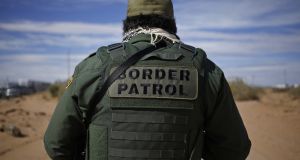 On the border: US Customs and Border Protection announced it will begin awarding contracts by the middle of April for Donald Trump’s proposed “great wall” to keep illegal immigrants out of the US. Photograph: Luke Sharrett/Bloomberg

CRH’s shares may have surged 15 per cent since Donald Trump’s election on the back of hopes that it will be a chief beneficiary from the Republican’s much-vaunted $1 trillion (€950 million) infrastructure spending programme.

However, Albert Manifold, chief executive of the Irish building materials giant, has ruled out being involved in Trump’s plan to build a security wall along the US border with Mexico.

CRH’s Oldcastle unit, based in Atlanta, is the largest cement and construction materials group in the US. But Manifold told reporters on Wednesday that the issue of the company participating in the construction of a wall along the 2,000-mile (3,218km) border “doesn’t arise” as the group has doesn’t have any “significant presence in the extreme south” of the US.

He made the comments on a call with reporters after CRH reported a 41 per cent surge in earnings in 2016 before interest, tax, depreciation and amortisation, to €3.13 billion.

Last week, US Customs and Border Protection said it will begin awarding contracts by the middle of April for the president’s proposed “great wall” to keep illegal Mexican immigrants out of the US.

The agency said on Friday it will request initial bids on or around March 6th. Interested companies will have to submit “concept papers” to design and build prototypes by March 10th. The notification gave no details on where the wall will be built first or how many miles would be covered initially.

The project is “not of interest to us or relevant to us”, Manifold said.

Others definitely are interested, however. Germany’s Heidelberg Cement has said it expects to profit from a border wall, while US companies from Vulcan Materials to Martin Marrieta Materials and Granite Construction are being tipped as potential bidders for associated contracts.

Still, some analysts predict that there may be no bigger winner from the mammoth project than Cemex, a construction materials group based in . . . Mexico.

1 Who are Ireland’s 17 billionaires?
2 The entrepreneur who went from ‘total poverty’ to a Lamborghini
3 My father in a nursing home wants to gift me his house
4 Are there annual limits on inheritances or gifts to a child?
5 State subsidises public sector retirees to cover gap until State pension
6 Avolon executives share €27m in pay as revenues soar
7 Northern Ireland drops campaign for lower corporation tax rate
8 Property firm sues engineering company over waterproofing of basement
9 Q&A: Why has the pension age question suddenly become an election issue?
10 Should I sell the old family home to allow children buy apartments?
Real news has value SUBSCRIBE