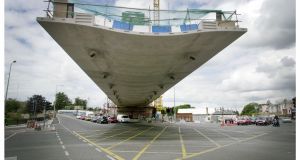 The Luas bridge in Dundrum. Engineers Ireland wants a national infrastructural unit, housed in the Department of the Taoiseach, to take ownership of project planning over a 20-30 year horizon.

The umbrella group for engineers in Ireland has called for the establishment of a super junior ministry to oversee the State’s infrastructural needs.

Engineers Ireland also wants a national infrastructural unit, housed in the Department of the Taoiseach, to take ownership of project planning over a 20-30 year horizon.

He said the success of the project was predicated on cross-party political support, a deadline, which reduced the level of prevarication, and strong collaboration between the groups involved.

He admitted the formula would be hard to replicate in a normal political cycle.

Such investment was “ideally suited” to pension funds as it delivered a modest rate of return over an extended period.

However, he said a problem for the UK and Ireland was that pension funds were on average too small and getting them to pool their resources was difficult.

On Engineers Ireland’s proposal for a government ministry focused on infrastructure, Sir John said what was important was finding a device for getting co-ordination across government departments.

As part of a raft of measures, the group wants the next Irish government to increase in spending on infrastructure from 2 to 4 per cent of gross domestic product (GDP) over the next five years.

After the crash, spending on capital projects was cut in order to correct the shortfall in public finances.

In October’s budget, however, the Government announced €27 billion funding over five years on capital projects, which include a new Metro North rail line and a multi-phase Dart expansion programme.

“Our proposals seek to embed long-term, strategic thinking in infrastructure planning and delivery, and avoid short-termism, localism and siloism that can often delay projects and mispriortise investment,” she said.

The group believes a single unit with ministerial leadership is needed to sustainably plan investment in key areas such as transport, education, health, energy, water and the digital economy.

Cosgrave Group to sell 368 units at Cualanor for €210m