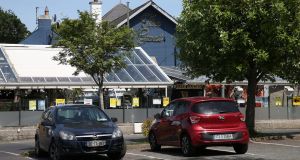 Publican Charlie Chawke is to seek planning permission for 290 apartments and a four-star, 50-bedroom hotel on lands adjacent to his Goat pub in south Dublin.

Mr Chawke’s company Charjon Investments Ltd has entered formal consultation with An Bord Pleanála on the apartment proposal, with a view to lodging fast-track plans after the appeals board carries out a preliminary assessment. The plan envisages building the apartments in four blocks.

Mr Chawke said the apartments would be sold on the open market rather than through the buy-to-rent model.

“I am very excited about what is planned,” Mr Chawke said. “Goatstown needs a hotel and needs accommodation.

“This land is lying there and it need to be developed or else we will be in trouble with Dún Laoghaire-Rathdown County Council,” the publican said, referring to council powers to impose an annual vacant site levy of 7 per cent of the land’s value.

He said he hoped construction work could commence in the next 12 months.

Mr Chawke was unsuccessful with a previous planning application at the site 15 years ago. “This is a much better plan and more suitable for the Goat and the whole site,” he said.

Mr Chawke purchased the Goat, in Goatstown, in 1982 for £600,000, opening what became his third pub the following year. He bought the lands adjacent to the pub on which the apartments will be built later.

On his plans to reopen seven of his pubs as restaurants next month when more coronavirus restrictions are lifted, Mr Chawke said preparations for that were continuing.

“We will abide by all the requirements and make the place acceptable and safe to our locals and staff,” he said. Mr Chawke said that food already accounted for more than 50 per cent of the group’s business before the pandemic.

He said roughly 70 per cent of his 440 staff had lost their jobs in the closures.