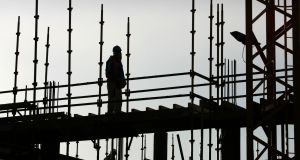 The UK’s largest independent construction materials company has confirmed it is in talks to acquire “all or a significant part” of the Northern Ireland-based Lagan Group.

Breedon Group said in a statement on Monday it had taken a decision to respond to recent press speculation concerning the acquisition of the Lagan Group, which is a construction materials business based in Belfast.

Breedon said it “regularly engages” with companies in its sector and said it was in discussions with Lagan and its major shareholders in connection with a possible acquisition of a substantial part of the business.

The company employs about 2,300 people and has more than 750 million tonnes of mineral reserves and resources. Its strategy is to continue growing organically and through acquisition of businesses in the UK heavyside construction materials market.

In a note, an analyst with Davy said any deal would be consistent with the company’s stated aim to consolidate the UK construction materials market while also stepping into Ireland for the first time.

“The group is well placed financially – albeit an equity raise may be required depending on the size of the final deal,” he said.

“Any deal is likely to focus on Lagan’s construction materials businesses, which comprise the majority of its €400 million turnover. These include Lagan’s cement, aggregates and asphalt businesses but would likely exclude any housebuilding units.”