State may see ‘no apartment supply over the next few years’ 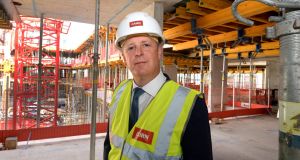 Cairn Homes chief executive Michael Stanley. Cairn is Dublin-centred and almost half of its investment has been on sites within the M50. Photograph: Cyril Byrne

There will be little or no apartment supply in Ireland over the next few years, Cairn Homes has warned the Department of Finance.

In a meeting held in November, Ireland’s largest housebuilder told the Minister for Finance there was a need to increase housing output in the €275,000 to €350,000 price bracket where price increases were retained by the macro-prudential loan-to-income rules, adding that there was a “mismatch between apartment supply and new office supply in Dublin”.

Records released to The Irish Times under the Freedom of Information Act show Cairn outlined a “number of constraints limiting their ability to achieve a faster mobilisation of their land bank”, including the fact Irish Water had indicated that capacity only existed for 40 homes on a site Cairn is hoping to build more than 400 homes.

The minutes specifically note that Cairn told the Department of Finance that “in the case of a site in Maynooth . . . Irish Water have indicated that capacity only exists for 40 units”.

In a letter sent in September, Cairn chief executive Michael Stanley requested a meeting with Minister for Finance Paschal Donohoe “to discuss the homebuilding industry and provide you with my relevant, recent experiences in scaling an equity-led homebuilder”.

“The perspectives which we have gained in scaling our business over the past two years, which I would like to share with you, hold some potentially valuable lessons for the sector and policymakers,” the letter continued.

Following receipt of the letter a number of civil servants advised a meeting with the Minister and Mr Stanley, suggesting the company came to previous meetings with then minister Michael Noonan with “an interesting perspective on and useful intelligence on market trends”.

A briefing document prepared for the Minister in advance of the meeting sought to probe Cairn on why it wasn’t currently building on a number of sites, what it sees as the main impediments to increased supply of residential units and whether Cairn had any ideas on how other residential building companies could scale up to take advantage of the low financing costs.

Additionally, it planned to ask whether the company sees a problem with the viability of apartment construction.

Asked about increasing the speed of mobilising their land bank, Cairn noted that of their 30 sites owned at the time of the meeting, “they are not in a position to build on 19 of these as of now”.

“In particular, they instanced difficulties and delays in getting local area plans approved or altered, mentioning the cases of Clonburris, Brennanstown Road and Cherrywood,” the records show.

At the meeting, Mr Donohoe told the company his key motivation in increasing commercial stamp duty in October’s budget was to signal the need for a shift from office to housing supply.

“The Minister drew attention to his decision in the budget to increase stamp duty on non-residential property emphasising that a key motivation was to signal the need for a shift from office to housing supply,” minutes show.

A briefing document prepared for the Minister in advance of the meeting said: “Construction of new homes is rising rapidly although from a very low base and still significantly lagging estimated demand.”

The document went on to suggest that between 25,000 and 35,000 new homes needed to be built annually over the medium term. It cited ESB connections that suggest 17,651 houses were completed in the year to August 2017 and compared those to the building energy rating (BER) ratings which point to a level much lower than that.

“The CSO, Department of Housing and the ESB are currently developing an alternative more accurate measure of new home construction,” the briefing added.