Late publican owned Dublin pubs Toner’s, the 51 Bar and the Waterloo with his brother 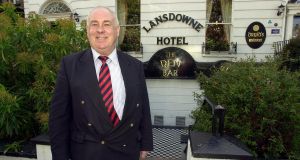 Publican Frank Quinn, who had been ill for a number of months, died on Thursday. Photograph: Eric Luke

Publican Frank Quinn has died at the age of 70. With his brother Michael, Mr Quinn owned the Dublin pubs Toner’s, the 51 Bar and the Waterloo, as well as the Lansdowne Hotel.

Mr Quinn, who had been ill for a number of months, passed away peacefully at his home on Thursday.

Originally from Pomeroy, Co Tyrone, Frank and Michael Quinn, who is known as Mick, took over the long-established and well-known Toner’s pub on Baggot Street in 1987. In a note posted to Toner’s social media accounts, Michael Quinn said the family was “heartbroken” by the loss of Frank.

Donall O’Keeffe, chief executive of the Licensed Vintners Association, described Frank Quinn as a “colourful character,” who was “one of those people that you just like”.

He had been a council member of the publican group for several years during the noughties and had also been involved in several charitable causes, Mr O’Keeffe said.

Along with his wife Maura he also set up Wilderness Activities Ireland, a company which provides walking tours of the Glenmalure Valley and the Wicklow Way.

Frank Quinn is survived by his wife, brothers Seán, Brian and Michael, sisters Kathleen and Margaret, and his extended family.

A private funeral for immediate family will take place on Easter Monday in Pomeroy and will be streamed live at 11am from the Church of the Assumption. A memorial of his life will take place at a later date.