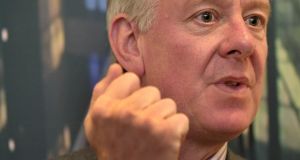 Green Property founder Stephen Vernon has received a philanthropy award for his work with community groups and charitable causes.

He was named the Community Foundation for Ireland National Philanthropist of the Year, with Hugh’s House founder Adrienne Stack and Vodafone Ireland also receiving awards for their philanthropy.

Hosted by philanthropic organisation the Community Foundation for Ireland, the awards are designed to recognise and celebrate extraordinary leadership and generosity in the area of philanthropy. Past winners include JP McManus, Brendan O’ Carroll, Feargal Quinn and Maurice Healy. The awards are currently in their 12th year.

Ms Stack was named Local Philanthropist of the Year. She established Hugh’s House in memory of her son to support families with sick children, giving them a providing a “home from home” while their children are in hospital

Liam O’Brien, Director of Strategy and External Affairs at Vodafone Ireland, accepted the Corporate Philanthropist of the Year award on behalf of Vodafone.

“We are incredibly proud of our partnership with the ISPCC Childline which provides a vital service for children all around the country,” he said. “It has also been fantastic to see the commitment and dedication of our people at Vodafone who have fully embraced the partnership, going above and beyond each year to reach our fundraising goals.”

“Whilst acknowledging that many people who give back prefer to do so in a low profile and anonymous way, we see the need for positive role models to create a ripple effect of generosity throughout Ireland,” said Tina Roche, chief executive, the Community Foundation for Ireland Previous Philanthropist of the Year Winners have achieved significant feats through their philanthropy and we hope this award continues to showcase that great work and demonstrate the potential that philanthropy holds.”