Only 22 per cent not considering pay adjustments due to Covid-19 crisis, survey finds 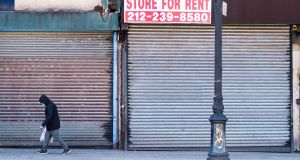 The top concern (75.6 per cent) was that the current crisis would lead to a global recession, a concern that economics experts have predicted will almost certainly occur.

More than 73 per cent of Irish businesses are looking at reducing employee hours in response to the crisis, with a further 19.5 per cent considering pay freezes and adjusting performance targets.

The survey found most business were planning to cut costs to match the new business landscape, or put off planned investments.

More than 56 per cent were worried about the financial impact of the virus on their operations and liquidity, while almost 44 per cent were worried about a fall in consumer confidence and consumption. A reduction in productivity and the impact of the outbreak on the workforce was a concern for 32 per cent of those surveyed, with difficulties in funding an issue for 22 per cent.

While more than three-quarters of Irish businesses expressed concern that the current outbreak of coronavirus will have a serious impact on business operations, 7 per cent said they were not concerned about the outbreak, saying it was an isolated challenge that wasn’t currently impacting the business, but were keeping an eye on the situation.

The top concern (75.6 per cent) was that the current crisis would lead to a global recession, a concern that economics experts have predicted will almost certainly occur. The Central Bank has forecast a three-month containment period for the virus will turn a €2.2 billion surplus in public finances to a €19.6 billion deficit in 2020 as the State increases spending on supports and tax revenue falls. Up to 500,000 jobs are expected to be lost as the economy shrinks by 8.3 per cent, the Central Bank said.

Meanwhile, PwC’s latest Covid-19 CFO Pulse survey of 153 chief financial officers in companies internationally indicated that many companies are rapidly adjusting their business strategies in response to the pandemic. More than half (52 per cent) are considering measures to contain costs and 47 per cent are considering deferring or cancelling planned investments and capital expenditure. Just 13 per cent of finance executives say they plan to change their mergers and acquisitions strategy, though this was much higher in the US responses (29 per cent).

Despite fears of Covid-19 extending to every aspect of business, there is some positivity. The majority of finance leaders surveyed (75 per cent) feel assured that their business could return to business as usual within three months should Covid-19 be resolved today.