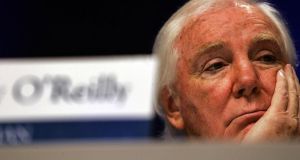 Sir Anthony O’Reilly: almost all of his assets have been sold off and so the public scrutiny will soon end. Photograph: Cathal McNaughton/PA

The global courtroom travails of Sir Anthony O’Reilly should serve as a warning to billionaires everywhere: stay solvent or every scrap of your personal affairs will be pored over in public by nosey lawyers and even nosier journalists.

The news this week that his share of the luxury Dromoland Castle hotel is being targeted for sale by his creditors is the latest nugget to emerge.

When O’Reilly was the richest man in Ireland, 15 or 20 years ago, he was able to control much of the flow of information about his personal interests, and hence was able to shape his own public image.

But since he went bust in 2015, almost everything we know about his affairs has emerged from court proceedings in three countries on two continents, but with one unrelenting ramification: everybody gets to rifle through his briefcase.

This is most likely – and understandably – distressing if you’re the fish in the bowl,with everybody staring at you. Whatever about his mistakes or his achievements – and there is no shortage of either – O’Reilly is a proud individual.

But business tycoons know that such brutal scrutiny, and the public voyeurism that goes with it, is the inevitable consequence of going bankrupt and losing control of your affairs to public officials.

€22 million High Court case taken by AIB against him in 2014 and 2015; a disputed lawsuit against him in Pittsburgh by his former nurse, Sabina Vidunas, who claimed she was owed tens of millions in cash and share payments; and his ongoing bankruptcy proceedings in the Bahamas, where he often resided.

The Vidunas lawsuit is currently closed; because O’Reilly is bankrupt, it is unlikely she will ever be paid, even if she were to win her case. The judge, however, has clarified that the case has not been dismissed and that it can be automatically reopened at the whim of either party.

He also ordered that an update of O’Reilly’s bankruptcy in the Bahamas, where financial information is less readily accessible, be publicly filed in the US every 60 days.

In recent weeks, the detail of some of the specific allegations Vidunas made against O’Reilly were resealed for a further 20 years to 2037, which means we will probably never know the full basis of her allegations.

But the latest bankruptcy update does reveal that insolvency practitioners in Bahamas and Cyprus, where one of his investment vehicles is located, both covet his stake in Dromoland, perhaps the best hotel in the land.

AIB, however, has a charge against his slice of the luxury property, and so far, it has blocked any sale. The update also reveals his stake in Providence Resources, where his son Tony jnr is chief executive, is about to be sold.

Further documents filed as part of the Vidunas case reveal that the Bahamas bankruptcy trustee appears to be chasing a $1.4 million house in the Bahamas bought by Vidunas with cash she received from O’Reilly.

He wants to sell it to help pay off O’Reilly’s creditors, with a dispute emerging over whether he gave her the money to buy it or whether it was a loan. Vidunas’s lawyers did not respond when asked if she was fighting this.

O’Reilly’s Caribbean home was sold last year for $12.5 million, and the documents tells us that a dispute between two of O’Reilly’s banks – BNY Mellon and local institution EFG – has since emerged over who should gain control of a bank account containing $715,000.

The cash was not part of the house sale proceeds, but BNY is arguing that it should have been offset against what EFG was owed on the house, leaving more cash for BNY to recover from the house money.

It is also revealed that O’Reilly and companies linked to him were on the hook to BNY Mellon alone for $100 million of promissory notes (remember that phrase?). That is a huge sum for anyone to be able to borrow, secured on nothing but your good name.

Contents from O’Reilly’s Bahamas house worth about €300,000 have been sold, with the last few items hitting the block at the end of March. Much of his art collection is also gone, while the bankruptcy trustee is conducting “residual investigation” of what is left.

We also learn that O’Reilly’s Bahamian bankruptcy attorney is a former attorney general of the island haven called John Delaney (no relation to the tie-flinging, rebel song-hollering chief administrator of Irish football).

For O’Reilly, the end of the process probably can’t come soon enough.

A US-based Twitter user who allegedly issued a bomb threat against Ryanair has just found out what most of us on this side of the Atlantic already knew: when Michael O’Leary gets the bit between his teeth, he won’t relent until he gets his way.

More than a year ago, a Twitter account under the handle of GunnexGod tweeted: “Hello @Ryanair, you have 15 minutes before I commit the biggest terror attack the UK has ever seen on one of your planes. Be ready.”

The airline alleges the tweet was the responsibility of an individual in Pennsylvania, Brian Lake. It has filed a lawsuit against him there over the allegation, although Lake has yet to file any sort of a defence or even respond to its claims.

Ryanair set about trying to serve papers on Lake, but initially found this difficult. It finally served him with the claim on the day before St Patrick’s Day.

Documents filed with the court reveal that the lawsuit papers were personally served on Mr Lake by a private investigator called Marshall Globicki.

The Web Summit may yet return to Dublin with a fintech conference, and its founder Paddy Cosgrave (above) also suggested this week that he would be open to bids from Dublin in future to host other events. It also announced it was hiring another 40 staff in Dublin, where the organisation is headquartered.

Perhaps the most interesting role for which Web Summit is recruiting is an “Irish government affairs manager”.

Given the spectacular nature of Cosgrave’s fallout with the public authorities here when the summit shifted to Lisbon, this role also looks to be one of the most challenging in Cosgrave’s office.

Time is a healer, however. Cosgrave says he is back working with IDA Ireland and government authorities again.

The government liaison role requires someone “well-versed of the inner workings of the Irish legislative and political landscape”.

As well as a salary and healthcare, the successful applicant will get “an unlimited supply of fresh fruit, beverages and cereals” and access to a private garden.

They’ll need somewhere to relax after dealing with some of the characters in Leinster House.