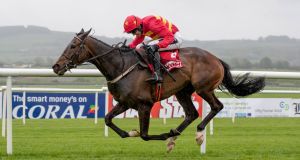 The future of several major stud farms in Co Kildare is under threat from the proposed development of a quarry near Kilcullen, according to leading figures in the horse racing industry.

Former jockey Ruby Walsh and racehorse owner the Aga Khan are among more than 200 locals who have become involved in a row over plans by Kilsaran International to develop a new quarry near their stables.

A representative of the Aga Khan warned that he might have to consider moving horses used for breeding to stud farms in France if Kilsaran was allowed to proceed with its plans to extract 3 million tonnes of sand and gravel over a 12-year period from a 32-hectare site at Racefield, which is located about 10km outside Kilcullen, Co Kildare.

The company, a leading manufacturer of concrete products based in Dunboyne, Co Meath, has submitted an appeal to An Bord Pleanála against the recent decision of Kildare County Council to refuse planning permission for the development.

Mr Walsh, a former champion jockey, and the Aga Khan, as well as the Irish Thoroughbred Breeders’ Association were among more than 220 parties, including two TDs and 12 councillors, who made submissions to the council opposing Kilsaran’s plans. Kildare County Council refused planning permission for the project on the basis that the local road network was inadequate to cope with increased traffic generated by the development.