Caveat: Dublin Bus must stop driving customers around the bend

Plus, Panti Bliss to speak at South by Southwest (SXSW) media and technology conference 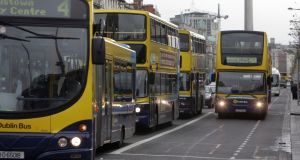 There is a guy on my bus route who thinks he is Elvis. Or rather, there is a Dublin Bus driver who occasionally drives a route I sometimes take to work who loves to play Elvis tunes on the way into town while he hums along.

There is nothing quite like a blast of Suspicious Minds on a Monday morning to make you wish it was still the weekend: “Here we go again/Asking where I’ve been/You can’t see these tears are real/I’m crying (Yes I’m crying)....”

Elvis the bus driver will have been chuffed that Dublin Bus backed down this week on its threat to summarily sack drivers who play radios while on duty. Union threats of industrial action and a tongue-in-cheek social media campaign by savvy radio stations saw to that.

The drivers also had public support. I certainly haven’t heard any passengers on Elvis’s route saying he should be sacked. Not for his driving abilities, anyway. Perhaps for when he occasionally sings....

The travelling public often is not on the side of Dublin Bus drivers, however.

When it isn’t defending the rights of drivers to play the radio (like the rest of us) while they drive, their union is pursuing pay claims. Dublin Bus drivers are currently engaged with the Labour Court over one such claim. They have also indicated that they may seek parity with the disgruntled Luas drivers who are on track to cause havoc across the city around St Patrick’s Day and Easter.

Pay claims inevitably lead to higher fares, which might erode some of the public support the next time the company trains its sights on Elvis.

The quality of service received by the nigh on 120 million customers a year who use Dublin Bus barely gets a mention whenever the National Transport Authority makes a determination on a Dublin Bus application for a fare increase.

The last such determination, delivered in October, considered a host of factors before deciding to award another increase for many cash fares. The quality of customer service did not seem prominent among them.

It should have been.

Dublin Bus passengers have been squeezed mercilessly in recent years to plug a black hole that emerged in the company’s finances during the recession. A mid-length journey cash fare that cost €1.60 five years ago now costs €2.70, an increase of almost 70 per cent.

The justification given for the increases were falling passenger numbers, a steady reduction in State subvention throughout the leans years and rises in fuel prices.

However, this year the subvention is set to rise by €6 million, passenger numbers have been growing since 2014, and the price of oil has collapsed to levels not seen in a decade.

Yet Dublin Bus still got an increase in some cash fares before Christmas.

Leap Card fares are about 20 per cent lower, but there is a €5 deposit to be paid for a Leap Card that must be factored into its cost. You don’t get that €5 back until you hand back your Leap Card. And then, you’d have to start paying the higher cash fares again anyway.

A measure of the quality of the customer service at Dublin Bus must be central in any future determinations on fare price rises.

Ask people who use Dublin Bus regularly about its service. Anecdotally, there is plenty of evidence to suggest there is a cultural problem throughout the company when it comes to addressing the same old issues of customer service again and again.

Don’t take my word for it. Check out its Twitter feed (@DublinBusNews) for examples of problems consistently raised by passengers: a lack of capacity at peak times, a deliriously inaccurate (Un)Real Time Passenger Information system, the regular timetabling no-shows on many routes, the ghost buses that don’t stop, the Godot-like waiting times during driver changeovers....

Dublin Bus this week asked passengers to name their favourite reading material while travelling on the bus. One gentleman responded to say he found “the Dublin Bus timetables to be fantastic works of fiction”.

Another passenger, stranded in the cold at a stop somewhere, staring at the RTPI screen, said he wanted the person responsible for the Dublin Bus app to lower him into his grave when he dies, “so they can let me down one last time”.

There will always be problems with such an extensive service. But it will take more than a formulaic Twitter feed and a confused app to address them.

Eamonn Egan, the Ireland country manager for the insurer Lloyd’s, tells us he trained to be a jockey back in the 1980s, “but I was too big”.

Egan never got to ride in a race, and eventually he “knuckled down” and entered a career in financial services. Dreams do come true, however. A Lloyd’s bloodstock coverholder recently suggested to Egan that he ride in the Punchestown charity race on April 30th, held in aid of research into kidney disease.

Egan was selected and is currently in training. He aims to raise €50,000. All donations gratefully received.

The highlight of his brief career in the racing business was when he “led up Folk Hero to win the Lincolnshire at the Curragh in 1980”, he says. Christy Roche was aboard, and Egan decided to cold call the trainer 36 years later to ask him if he could help get him ready for his impending race ride.

Roche, fair play to him, agreed, and three mornings a week, Egan is preparing by riding a JP McManus horse, Sword Fish (a son of Sadler’s Wells). If the ground is soft enough on the day, he may even get to ride Swordfish in the race.

Egan was 14 stone when he got the call to enter the Punchestown race. He is now 12.5 stone, and dropping. There’s dedication for you.

He is also due to “take up the reins” at the British-Irish Chamber of Commerce next month as its new president. Tally ho.

Dublin techies will be prominent at this weekend’s South by Southwest (SXSW) media and technology conference in Austin, Texas.

I always thought the web was supposed to be a bastion of independent, free thinking but Bushnell’s office has compiled some cog notes for the Irish speakers for SXSW “so that our tech and not so tech ambassadors can tell the same great story about Dublin”. In order words, to encourage them all to say the same thing.

The notes prompt them all to describe Dublin as a “a cool, open and creative capital city”. It is “the bridge between Europe and the US”.

“Dublin is where young tech talent from around the world loves to live, study and work,” the notes go on to say, while “we’re graduating thousands of computer and data scientists every year from universities like Dublin City University, Trinity College, University College Dublin and Dublin Institute of Technology”.

The industry has often complained of a shortage of technical graduates in Ireland, but not to worry.

There’s loads more detail to learn off about how brilliant Dublin is as a city for tech-types, which isn’t that far off the mark, really. The city is quite cool.

“So why, why Dublin? If you live here day by day you know the above is just for starters,” says Bushnell.

Speaking of SXSW, the law firm Eversheds, Bank of Ireland, KPMG and the arts group Culture Ireland are all supporting an IDA Ireland event at the conference.

Another (cater)pillar of the State’s foreign direct investment strategy?

Tughans, the Belfast law firm whose name cropped up in the Stormont investigation surrounding the purchase of Nama loans by US firm Cerberus in Northern Ireland, has won an award. It won the corporate law firm of the year gong at the, ahem, Insider’s Northern Ireland Dealmakers Awards this week.