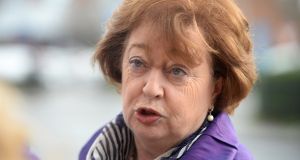 Social Democrats TD Catherine Murphy: refuses to testify over concerns she will be forced to reveal source of the information she relied on for the statements she made in the Dáil.

The State commission investigating loan write-offs at the former Anglo Irish Bank is expected to require another extension beyond the end of next month.

The draft report on the first module of the investigation into Irish Bank Resolution Corporation, the State entity running down Anglo, is not likely to be produced and circulated to affected parties until May or June at the earliest – several months behind schedule.

The commission, chaired by High Court judge Brian Cregan, was set up in June 2015 to examine transactions that led to a loss of €10 million or more to the State-owned bank.

Mr Justice Cregan has been hearing from the final witnesses in the first module which is focused on the sale of the building services company Siteserv, now called Actavo, to Isle of Man company Millington, which is controlled by businessman Denis O’Brien, for €45 million in 2012.

The company had about €110 million of loans written off to IBRC in the deal. The bank and then minister for finance Michael Noonan said at the time it was the best option for the State.

The commission was originally due to issue its final report at the end of 2015 at an estimated cost of €4 million but the judge sought repeated extensions, the latest to March 31st, with costs spiralling to between €11 million and €14 million.

Taoiseach Leo Varadkar has estimated that the final cost could be €30 million.

Mr Justice Cregan said in his most recent interim report last year that he intended to allow relevant parties two months to review his draft report once produced. This would push final production and publication of his report into the summer and to the fifth anniversary of the commission’s establishment.

The commission heard its 241st day of testimony last week as Clifford Forster, a banking expert, was cross-examined by several of more than a dozen parties being represented at the long-running privately held investigation.

Production of the draft report from the first module is already several months behind schedule, according to the commission’s own timetable in its sixth interim report to the Taoiseach in March 2019.

Extending the deadline again will likely fall to the next government.

The sale drew controversy because shareholders were paid €5 million despite the State-owned lender suffering a loss on the write-down of the loans.

Social Democrats TD Catherine Murphy raised questions about the deal and Mr O’Brien’s finances in the Dáil but has refused to testify at the commission over concerns that she will be forced to reveal the source or sources of the information she relied on for the statements she made in the Dáil.

The commission’s own counsel is understood to have said that Ms Murphy’s allegations have not been proven by the evidence presented at the investigation.

The commission has already sat for longer than the Beef Tribunal, which investigated a series of allegations in the beef processing industry in the 1990s.

1 Suspicions rife as key Brexit trade talks begin in Brussels
2 Corona beer firm reeling after 8% slide due to coronavirus
3 ‘The only time apartments were viable was in . . . Ballsbridge, Killiney and Dalkey’
4 Coronavirus: Wall Street joins global sell-off in worst week since 2008 crisis
5 Life as a Facebook moderator: ‘People are awful. This is what my job has taught me’
6 Has CRH done enough to silence pesky Swedish activists?
7 Covid-19: Aer Lingus parent cuts capacity, unable to provide guidance
8 Hospitality industry hoping it isn’t afflicted by US coronavirus fears
9 Why Irish banks are now looking beyond vulture funds on problem loans
10 Claims of intra-family espionage emerge in billionaire Barclay family feud
Real news has value SUBSCRIBE