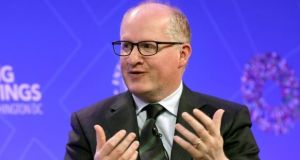 Not long gone from the centre of the Irish financial world, former Central Bank governor Philip Lane’s return to Dublin this week will see him address a number of events.

Last December, the European Central Bank – of which Mr Lane is now chief economist – took an optimistic view of developments but it nevertheless believes there is enough risk to warrant ultra-easy fiscal policy. This thinking will no doubt crop up at some stage during the week ahead, possibly beginning with Mr Lane’s appearance on Wednesday at the Financial Times/IDA Ireland European Financial Forum 2020 at Dublin Castle.

The event is pitched as bringing international and Irish policymakers, regulators and “thought leaders” to give their take on the economic issues of the day, and of the year ahead. Mr Lane’s views will be of keen interest. Accounts of the December ECB meeting quoted him as saying that data showed continued weak but stabilising euro-area growth dynamics.

“Measures of underlying inflation remain generally subdued, although there were some indications of a mild increase,” he noted.

The previous month, Mr Lane commented on how ageing populations were contributing to downward pressure on underlying real interest rates.

His insights also take on a particular importance in the days immediately following an election and, on Thursday, he will appear at both the Trinity College Philosophical Society and the Royal Irish Academy.

With the issue of housing featuring heavily during the election canvas on the doorsteps, Central Statistics Office data on Thursday will round off a year in which, while still climbing, prices have begun to calm.

December’s numbers should continue in a direction that points to some politicial breathing space, although many would argue 2019 is a house price year best left in the past.

The CSO report for November showed that, while values for the previous 12 months rose by 1.4 per cent across the State, it was a dramatic reduction on the growth of 7.2 per cent for the same period in 2018. In Dublin, where the pinch has been particularly painful, average prices declined by 0.7 per cent.

The slowdown in price growth has been widely linked to Central Bank mortgage lending rules and the pick-up in supply, and, for those desperate to buy or upgrade, 2020 is looking a bit more optimistic.

Earlier this month, the European Banking Authority found Irish home and commercial property prices were likely to dip slightly over the next three years in projections that were based on data received from the Central Bank.

1 Suspicions rife as key Brexit trade talks begin in Brussels
2 Corona beer firm reeling after 8% slide due to coronavirus
3 Life as a Facebook moderator: ‘People are awful. This is what my job has taught me’
4 Irish companies restrict travel over coronavirus fears
5 ‘The only time apartments were viable was in . . . Ballsbridge, Killiney and Dalkey’
6 We have little chance of building enough homes to meet election promises
7 Pharma giant AbbVie warned Government against ‘unfair’ €572m tax bill
8 How businesses could tackle transport problems in a green way
9 Coronavirus: Iseq down 11% in five days as global sell-off is worst week since 2008 crisis
10 Covid-19: Aer Lingus parent cuts capacity, unable to provide guidance
Real news has value SUBSCRIBE