Who will be bidding for Blanchardstown Centre? 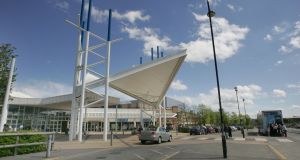 As Green Property Group prepares the €1 billion sale of the Blanchardstown Centre in west Dublin, attention has turned to who might be interested in purchasing what is one of Ireland’s best-performing retail assets.

Hammerson also acquired part ownership of the Ilac shopping centre and the Pavilions in Swords, as well as a site off O’Connell Street, giving it a “major new platform of high-quality retail property in Ireland”. This suggests an appetite for more deals here but, given that Hammerson and Allianz have yet to conclude an agreement with developer Joe O’Reilly over securing control of the Dundrum assets, the timing might not be right for a run at Blanchardstown.

All of these would be thought likely to run the rule over Blanchardstown, which is being sold by joint agents JLL and Eastdil Secured.

The Abu Dhabi Investment Authority is believed to have run the rule over Dundrum last year but did not participate in the final stages of bidding. Property sources believe it to be more interested in trophy assets, a category that the Blanchardstown Centre, for its all its success, would not fit into.

The Abu Dhabi fund is also thought to target higher returns than the 5 per cent yield offered by Blanchardstown, as evidenced by its purchase last year with Chartered Land of Seán Dunne’s former hotel sites in Ballsbridge. It’s a riskier development but offers potentially higher returns.

Local bidders will be thin on the ground but one party that could figure in the reckoning is Iput plc, the Irish commercial real-estate fund. Last summer Iput quietly made a bid of about €350 million for the Hines/HAIL stake in Liffey Valley, which was rejected.

It wouldn’t be able to write a cheque for Blanchardstown on its own but it could form a consortium to make a bid.

The timing of the Blanchardstown sale is interesting. It could be that the owners simply want to cash in their chips now after 20 years with the asset.

Green Property’s Stephen Vernon will be 66 in March while operations director James McKenna, who has been involved in Blanchardstown since the start and is a significant shareholder in the company, was 72 this month. It might be a matter of timing for them.

Or they could be making a call on the Irish economy and retail sector. Ireland has achieved spectacular growth since exiting its EU-IMF bailout at the end of 2013 but the global stock market rout this month, concerns over China’s economy and falling commodity prices pose questions about the sustainability of our recovery.

Will global investment funds be willing to write a big cheque for a mid-market shopping centre in west Dublin at a time when the global economy is so vulnerable?

We will have our answer in the coming weeks.

1 Poll on second election, concerns over Irish pension gap, and Ireland’s rich list
2 Irish economy to grow by 3.4% this year, predicts EY
3 Should AIB compensate me for upsetting letter on arrears?
4 How to turn racists’ genetic arguments against them
5 High time: Netherlands moves to clean up absurd cannabis policy
6 The Irish man making his mark on California’s cannabis industry
7 Don’t invest in an ETF until you understand the tax
8 Apple’s secretive Cork facility opens up – to an extent
9 Chris Johns: The Johnson administration will spend, and needs a quiet Treasury
10 Tax shifts won’t drive multinationals out of Ireland - Moody’s
Real news has value SUBSCRIBE