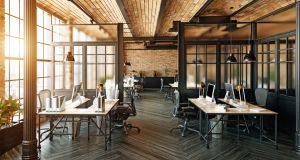 In total, 109,710sq ft of flexible office space was leased last year, down from the 410,266sq ft the previous year. Photograph: iStock

The decline of shared office space provider WeWork was one of a number of factors that prompted a 73 per cent drop in the volume of space leased by flexible office providers in Dublin last year, according to data released by property agent Savills.

While seven deals had been understood to be at advanced stages last year, WeWork ultimately only agreed two deals, something that had an impact on take up.

The office space it had been in the running for included the New Ireland Assurance building on Dawson Street, Central Quay on Sir John Rogerson’s Quay, the Forum and New Century House both in the IFSC and Clerys Quarter in the former Clerys department store building on O’Connell Street.

WeWork, which has leased space at the old Central Bank development on Dame Street – Central Plaza – and George’s Quay House, had planned to publicly list in New York last year, but a plethora of issues emerged which derailed the plans. The company, founded in 2010, has substantially scaled back its plans to lease office space.

Figures released last month from office brokers Click Offices found that the Dublin serviced market grew by 30 per cent in 2019, with 7,000 new desks. The reason this data doesn’t tally with that from Savills is because the Click metric is desks, which require a building to be fully fitted out, while the Savills data includes space both in development and already developed.