Purchaser of one-third of Treasury Building will get annual rent of €1.83m 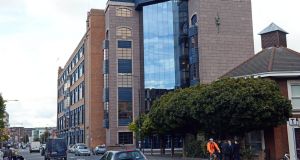 Treasury Building on Lower Grand Canal Street, Dublin: located in an area with an influx of international companies such as Google, Twitter, Facebook, Accenture and Stripe. Photograph: Eric Luke

An unusual investment opportunity involving one of Dublin’s best-known office buildings is to be unveiled later this week by agents CBRE when they offer for sale the freehold interest in the €100 million-valued Treasury Building at Lower Grand Canal Street.

Colm Luddy of CBRE will be guiding €33 million for the 33.33 per cent stake and an attractive proportion of the rent roll showing a net initial yield of 5.25 per cent and a capital value of €800 per square foot.

The Treasury Building is let to high-calibre tenants including the National Treasury Management Agency, Nama and global healthcare company Perrigo at an overall rent of €5,482,000. The freeholder is entitled to €1.83 million of the annual income.

CBRE is handling the sale of the freehold interest for Percy Nominees who originally bought this stake when the building was redeveloped in 1989 by Ambiorix Ltd, a company controlled by developers Johnny Ronan and Paddy McKillen. At the same time as it purchased its freehold stake, Percy granted a 10,000-year lease back to Ronan and McKillen in return for 33.33 per cent of the net rent roll. Ambiorix continues to retain 66.67 per cent of the rent paid by the occupational tenants and though the company has had first option to buy the Percy stake, the standard notices have been served and Percy is now free to offer the investment for sale on the open market.

Treasury Building has by far the highest profile of any office building in Dublin apart from Government Buildings because of the constant flow of publicity about one of its tenants, Nama. It was previously known as Boland’s Mill and was converted into a grade A office block in the early days of the 1989 property recovery. It has an overall capacity of 11,619sq m (125,066sq ft) over six floors with 110 car parking facilities and 24 further spaces on a licence agreement from Clanwilliam Place.

The building offers excellent flexibility with large, open-plan floor plates extending to 1,900sq m (over 20,000sq ft) which can be used for open or cellular office space. Internally the block is finished to a high standard and benefits from a clear ceiling height of 5.4m.

Treasury House is located along the Grand Canal in an area that has seen an influx of international companies such as Google, Twitter, Facebook, Accenture and Stripe.

Failure to tackle pensions timebomb will have stark consequences 05:45
Rathgar residential development site guiding at €2.5m 05:45
Watchdog warns of major fiscal challenges with growth to slow to 1% 04:10
Ireland’s age of retirement must be pushed out, watchdog warns 02:44
IFSC office suite available at competive rent of €45 per sq ft 02:30