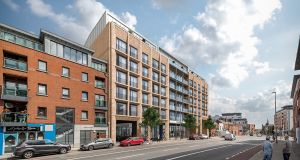 An image of the proposed 397-unit co-living scheme on Cork Street, Dublin 8

Stoneweg, a property investment firm with a portfolio worth more than $2 billion, is to develop a 397-unit co-living development in Dublin city centre.

The Geneva-headquartered group has just acquired seven vacant buildings on Cork Street in Dublin 8 as part of a joint venture.

No price has been disclosed for the off-market transaction although industry insiders suggested the cost of the new scheme would be over €100 million. The deal is the fourth investment made by the property firm in Ireland.

Stoneweg, which was founded in 2015 and is headquartered in Geneva, Switzerland, is also active in the Spanish, Italian and US property markets.

The adjacent properties Stoneweg has acquired on Cork Street are largely derelict and, subject to planning permission being granted, will be demolished. The one-acre site is already zoned for residential development

Stoneweg said each unit in the new development would be “significantly larger than the current national minimum standards for co-living”.

Designed by John Fleming Architects, the development will provide new connections from Cork Street through to neighbouring John St South.

“We’re very pleased to have completed this acquisition during the lockdown period, which we were able to do in part because of our professional team and the strength of our partnership on the ground in Dublin,” said Christian Falster, head of Ireland operations at Stoneweg.

“This project is another strong addition to our portfolio of housing developments in a city where demand is significantly outstripping supply and institutional interest in income producing residential assets is growing,” he added.

Changes in the planning laws introduced by former minister for housing Eoghan Murphy in 2018 allowed developers build co-living forms of housing. A number of schemes have been announced since then with developers selling it as a solution to the housing crisis.

The first co-living scheme to be given the green light was a Bartra Capital-backed development for 200 units on Eblana Avenue, Dún Laoghaire in July 2019.

Its housing spokesman Eoin Ó Broin said at the time that expecting people to live in a 12 square metre space was not a solution to the housing crisis.

The new Minister for Housing Darragh O’Brien, in an interview last year, also voiced opposition to the concept of co-living and has conducted a review of the laws.

Objectors to a co-living plan for Merrion Road in Ballsbridge have said the co-living arrangement is unsuitable in an environment where Covid-19 is a national issue.