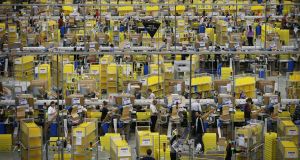 Industrial and logistics assets are the most sought-after real estate class for European investors, according to CBRE’s annual Europe, the Middle East and Africa Investor Intentions Survey.

The sector has overtaken offices for the first time in the survey as the most popular asset class as the growth of e-commerce drives demand for logistics space.

“A third of survey respondents in Europe expressed a preference for industrial property, mirroring the trend globally, and reaffirming its status as an institutional asset class,” says Marie Hunt, executive director and head of research at CBRE.

“2017 was the year the industrial and logistics sector was unquestionably rerated, evidenced by the number and scale of portfolio deals in the sector. Logistics yields remain at a premium over other real estate sectors, and the sustainability of returns in the sector is underpinned by a robust occupational market, which is attracting investors from around the globe.”

Offices ranked second in the survey, favoured by 26 per cent of respondents, as investors seek markets with strong economic fundamentals to underpin rental growth and high-levels of liquidity.

Interestingly, the residential sector recorded the steepest rise in popularity with investors – it was the preferred asset class for 21 per cent of respondents – as the amount of capital deployed in asset classes like student housing and retirement living surged.

Given the strong pricing and limited availability of core stock, the survey notes that investors have become increasingly resourceful in finding innovative ways to deploy capital. Some 72 per cent of respondents were already invested in alternative property classes to traditional offices and retail while 70 per cent said they were actively pursuing opportunities in the alternative sector.

“Despite 2017 being a record year for real estate investment in Europe, with volumes totalling €291 billion, European investors expect to deploy more capital in 2018 than they did in 2017,” says Ms Hunt. “However availability of product remains a primary concern for investors in 2018, proving to be the biggest obstacle for 34 per cent of European respondents, a challenge that investors are facing around the globe.”

The survey also analysed the geographic preferences of investors. Paris, Madrid, Amsterdam, Frankfurt and London were the five most sought-after destinations in Europe for investors. Paris jumped from fifth to first place, compared to 2017. Ms Hunt says there has been “a shift in sentiment towards France for many months now, following the election of Macron and the subsequent economic momentum this has created”.