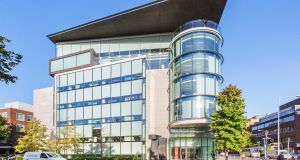 Developed by David Arnold/D2 Private in 2008, One Warrington Place occupies a prominent position on the Grand Canal.

US biopharma company Regeneron looks set to expand its Irish operations further with a planned move from its current offices at Europa House on Harcourt Street to One Warrington Place in Dublin 2.

Regeneron has agreed to sub lease 14,000sq ft (1,300sq m) at One Warrington Place from the building’s main tenant Bord Gáis Energy for a term of five years. A rent of €60 per sq ft (€645.84 per sq m) and €4,000 for each of the basement car parking spaces has been agreed between the parties. John Cannon of BNP Paribas Real Estate represented Bord Gáis Energy while Paul Hipwell of Lisney’s advised Regeneron.

Regeneron is one of a number of major pharmaceutical companies currently to the fore in the development of drugs that either treat or prevent Covid-19.

Only three weeks ago, the company, which employs more than 1,000 people at its manufacturing site in Limerick, was awarded $450 million (€383m) by the US government to develop a Covid-19 antibody cocktail.

Known as Regn-Cov2, it uses laboratory-produced monoclonal antibodies to mimic natural antibodies from infected people. Regeneron has started “late-stage clinical trials” with 2,000 patients to assess the effectiveness of the treatment, having only begun trials in June.

Regeneron’s new Dublin offices meanwhile are fully-fitted and distributed between the fourth and fifth floors of One Warrington Place. Developed by David Arnold and D2 Private in 2008, it comprises a six-storey grade A office building extending to 55,000sq ft. The property occupies a prominent position overlooking the Grand Canal at the junction of Mount Street Lower and Warrington Place.