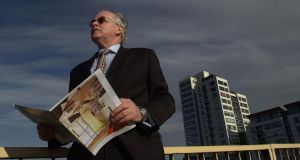 In a further sign of pressure in the Dublin rental market, one of the city’s biggest property companies has told landlords it will no longer manage single-property lettings because of the regulatory costs involved.

Hooke & MacDonald has said it is cutting back on managing individual lettings for landlords because of the increased cost and paperwork arising from significant changes to residential tenancies law.

The estate agent cited the changes to the Residential Tenancies Act since 2015 “along with general market expectations and demands” that have had “an impact on our company resources” in a letter to landlords informing them that they would have to find another company to manage their properties.

The firm will continue managing bulk lettings and apartment blocks on behalf of property companies because of the “economies of scale” with managing multiple properties.

“We are cutting back on individual lettings because they are just not viable,” said the firm’s managing director Ken MacDonald.

“It is as easy to manage 20 properties as it is to manage one or two properties. With all the new legislation that has come in, there’s a lot of background work involved so we are cutting back.”

Legislative changes introduced in December which include obligations on rent pressure zones and rent-increase curbs of 4 per cent, along with changes to termination notices, has increased the amount of paperwork for landlords.

“We find people aren’t prepared to pay the extra amount needed to cover your costs on it. It doesn’t make sense to be doing it,” said Mr MacDonald.

“The new legislation that was brought in in December was brought in with the best of intentions, but it does bring a heavy burden of extra work in managing properties.”

Landlords with about 20 individual properties managed by the firm will be affected and will have eight weeks to find another managing agent to look after their properties or manage the property themselves.

“It means I have to find someone else which is irritating because I have had them for five or six years,” said one of the landlords affected who did not want to be named.

“I have to set up a new relationship with the tenant and find a new agency, and potentially I have to pay double the amount of letting fees. It is the sort of remorseless dumping of clients on which they don’t see themselves making money. That is very poor.”

The change could encourage landlords to sell up and increase the pressure on an already stressed property rental market as rents continue to rise amid a record shortage of available rental properties.

“A company like Hooke & MacDonald will be aware of the legislation and if they are finding it that costly to comply with, you can see the difficulty other people will have,” said Margaret McCormick, spokeswoman for the Irish Property Owners’ Association, which represents 5,000 landlords.

She described the legislation covering the landlord sector as “extremely complex and extremely difficult to navigate and to get right” and said that the 4 per cent curb on rent increases has punished many landlords who had maintained their rents well below market rates for sitting tenants.

Some 65 per cent of landlords rent out just one property, while 92 per cent have less than three properties, according to a report by DKM economic consultants for the Residential Tenancies Board.

Rents rose by an average of 13.4 per cent in the year to March in a sector that was showing signs of “extreme distress,” the property website Daft said earlier this month.

Meanwhile, one landlord, who has been renting out properties in Dublin for a half-century, said that the burden of compliance requirements and the paperwork for landlords has “never been as bad”.

Saying that he has reduced the number of properties he rents out by half as a result, the landlord, who declined to be named, said: “It is a nightmare”.

“The State’s requirements are crazy. If you were one of these big Reits [real estate investment trust] or vulture funds you have all these backroom people to do the work.

“When you come down to individuals, they don’t have that support. It is another one of the reasons why so few people are letting even one property any longer or even half a dozen properties because the compliance requirements are just killing it.”

The Dubliner said he was “not in the least” surprised that Hooke & MacDonald has said it will no longer manage single properties for landlords because of the cost of complying with new Government regulations for the rental sector. He predicted they would be the first of the firms to move out of this end of the market.

“These are companies set up with that business in mind. They have the business, the computers and the staff,” he said. “Can you imagine what it is like for people with half a dozen properties? If the experts are finding it a problem and not economic for them, why is it a surprise that nobody is letting out properties and they are trying to get out of the business?”