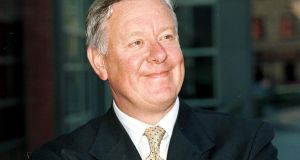 It also remains optimistic about Brexit-related opportunities in the commercial property sector following JP Morgan’s recent decision to acquire an office block in Dublin’s docklands in a move that provides the US investment bank with the capacity to double its Irish workforce to 1,000.

“We’ve got a very positive backdrop to logistics and I think it is something that will do particularly well in Ireland,” said Mr Vernon, speaking on the fringes of the EY Entrepreneur of the Year chief executives’ retreat, which is taking place in San Francisco this week.

The property veteran is chairman of Green Property and director of Green Reit, the latter of which was the first real-estate investment trust listed in Ireland. It owns more than €1.3 billion worth of commercial property with an annual rent roll of €65.1 million.

“Logistics is doing well everywhere on the back of the strength of e-commerce transactions, and the economy has probably reached the point in Ireland where we should be developing our own logistics rather than just piggybacking off the UK,” said Mr Vernon.

Logistics was the strongest-performing real-estate sector in Ireland last year and Green Reit has been investing heavily in the area, buying an additional 164 acres at its Horizon Logistics Park development near Dublin Airport last December to take its holding to 264 acres.

Mr Vernon, who was awarded the EY Entrepreneur of the Year Industry award in October, said he also believes the firm and the wider property market in the State will gain as Brexit becomes a reality.

“JP Morgan’s decision to expand in Ireland is important because it is a very powerful global leader and their imprimatur on the country as a location for Brexit-related activity will lead other banks and smaller companies in other sectors to consider Dublin,” he said.

Green Reit this week signed an agreement with AIB to lease the entirety of its recently completed office building at Central Park in Leopardstown, Dublin. Mr Vernon said the company will shortly make a decision on Block I, an adjacent block that has full planning permission for a further 82,000sq ft over eight storeys.

“It has been an exciting year for us in which we sold Blanchardstown, completed One Molesworth Street, and closed down our London office,” said Mr Vernon. “We are making good progress on income on the rest and are well-placed to withstand any possible turbulence that might come our way.”