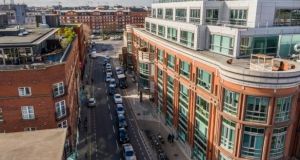 Some €680 million of real estate spending was in the third quarter on 14 individual transactions, according to figures from CBRE

Close to €2.4 billion was invested in Irish real estate during the first nine months of the year, new figures show.

Some €680 million of this was spent in the third quarter on 14 individual transactions. While this is considerably less than the volume that would have been transacted had the country not entered lockdown earlier in the year, it is seen as a reasonable result.

“It represents a 59 per cent uplift on second quarter volumes, which we define as a ‘lost quarter’ for the market,” said Kyle Rothwell, head of capital markets at CBRE, which compiled the figures.

The data shows that 69 per cent of third quarter transactions were for multifamily assets, with 29 per cent for office buildings.

“The continued low interest rate environment coupled with unallocated capital positions means that there is now considerable investor liquidity built up and looking to deploy into Irish real estate, and there has been good underlying demand for assets that have been formally launched for sale since the autumn season commenced,” said Mr Rothwell.

The combination of the €1.34 billion sale of Green Reit in the fourth quarter and a swathe of so-called “mega deals” carrying values in excess of €100 million apiece helped propel the level of investment in the Republic’s commercial property market to a new record of €7.2 billion last year.