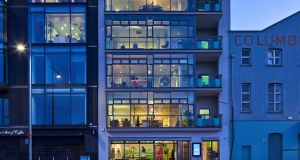 The prospect of immediate rental income from a strong covenant in one of Dublin’s most sought-after locations is expected to attract a wide range of parties to the sale of 16 Sir Rogerson’s Quay.

Located on the waterfront and at the heart of the city’s south docklands, the investment comprises a six-storey office block extending to 899sq m (9,675sq ft), arranged over ground and five upper floors. Six car spaces are included in the sale providing a generous car parking ratio of one space per 150sq m. The investment is being offered to the market by agent JLL at a guide price of €9.8 million.

The subject property is fully let to Core, Ireland’s largest marketing communications company with approximately 14 years to expiry. The tenant has recently committed to the location by removing a break option in January 2025 and pushing it out until January 2030. The current rent is €489,319 per annum (€48.25 per sq ft and €3,750 per car space) providing significant reversionary potential, according to the selling agent.

The guide price of €9.8 million reflects a net initial yield of 4.5 per cent for the investor. The tenant will not be affected by the sale.

16 Sir John Rogerson’s Quay features a fully-glazed facade to capitalise on the building’s riverside views. The property is predominantly open plan with average floor plates of 149sq m (1,600sq ft) with smaller meeting rooms on the top floor which can be opened into a larger conference room or function area with panoramic waterfront views across the city. There is a modern canteen situated on the ground floor with tea stations on some of the upper floors.

The property enjoys a high-profile position within Dublin’s south docklands, an area widely acknowledged as one of the city’s best locations for business. The respective European headquarters of Google, Facebook, and Stripe are all located within a short walk of the property while Hubspot’s EMEA HQ is situated on Sir John Rogerson’s Quay itself.

In terms of amenities, the immediate area is home to The Convention Centre Dublin (CCD), the Marker Hotel, 3Arena, Bord Gáis Theatre, as well as a variety of cafes, restaurants, pubs and parks.

Sir John Rogerson’s Quay is well connected by public transport with the Dart , Luas red and green lines, numerous Dublin Bus routes, and Dublin Bike stations all to be found within a short walking distance.

Jacqueline Fitzpatrick, who is handling the sale on behalf of JLL, says: “This is a rare opportunity to acquire a trophy city centre office block on Sir John Rogerson’s Quay, one of Dublin’ best office addresses in a lot size that is accessible to high net worth investors as well as pension funds, private banks, and wealth managers.

“The combination of long-term income with reversionary potential in an exceptional prime waterside location will be attractive to investors, looking for secure stable investments.”