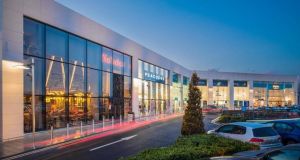 Omni Park Shopping Centre in Santry, Dublin 9, has grown its retail offering with the arrival of three new tenants.

Maxi Zoo, which has a countrywide presence, has chosen the popular scheme as the location for its 21st store. The pet food and accessories supplies specialist now occupies 6,000sq ft in a fully-let block alongside a number of other major retailers including Marks & Spencer and Lidl. Niall Delmar of JLL acted for the landlord while Johnny O’Connor of CBRE acted on behalf of the tenant for this transaction.

The introduction of L’Ombre at Omni Park meanwhile represents a further diversification of the 308,000sq ft of retail and leisure space, and its 11-screen IMC cinema complex. L’Ombre was represented by Jennifer Mulholland while Niall Delmar of JLL acted for the landlord.

The third letting, which was handled on behalf of the landlord by Paul Kelly of Mason Owen & Lyons, sees the opening of a new Permanent TSB branch at the Santry scheme. Fergus Slattery acted for the tenant in this instance.