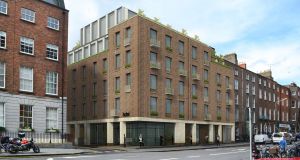 A computer-generated image of the new 53-room hotel to be built on the site of Howl At The Moon nightclub on Lower Mount Street, Dublin

A development company controlled by Paddy McKillen Jnr and Matt Ryan has sought planning permission to demolish the Howl At The Moon nightclub on Lower Mount Street, Dublin 2, and to build a 53-room hotel on the site.

The premises was formerly part of the Capital Bars group, and was sold in 2014 to Danu Investment Partners, along with the George, the Dragon (since reopened as NoLIta) and Café en Seine in a €15 million deal.

In 2016, the venues became part of the Mercantile Group following a merger, but Howl At The Moon was sold some months later to the McKillen-Ryan company Oakmount for a reported €3.2 million.

The three-storey nightclub is something of an outlier on Lower Mount Street, being significantly lower in height than its Georgian neighbours, which are predominantly four to five storeys over basement.

Oakmount’s plans will remedy this anomaly, with the existing structure to be replaced by a six-storey brick-fronted hotel.

Oakmount owns one completed hotel, The Dean on Harcourt Street, Dublin, and has planning permission for two more in Ranelagh and North Wall Quay.

The layout of the Mount Street hotel, which will be similar to the others owned by the group, will feature a bar and reception area at ground floor and a rooftop restaurant, complete with outdoor terraces.

The 53 guest rooms will be spread over four floors, while the basement will accommodate function rooms and a meeting room.

In Ranelagh village, Oakmount’s hotel is currently under construction, and is due for completion in June 2018. The 1,868sq m (20,107sq ft) hotel will offer 41 guest rooms, a bar and restaurant at ground floor, a rooftop restaurant and a small art-house cinema.

In all, Oakmount will have 204 rooms across its four hotels once they are all completed, assuming the Mount Street plans are approved.