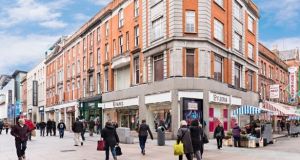 AEW had been underbidder on a number of Dublin properties over the past two years, but was successful on this occasion, paying about €20.5 million for the investment, which will show a return of 4.2 per cent.

Kevin McMahon of Savills, who had been guiding €18 million for the property, declined to comment. AEW, which outbid four other investment funds, is a leading global real estate manager with more than €19 billion of real estate assets under management in Europe.

The latest high-profile retail sale is at the corner of Henry Street and Moore Street and is let in its entirety to the Arcadia Group at a rent of €865,000 per annum. The 35-year lease from 1985 has 3.95 years to run.

The ground, basement and first floors are in retail use, while the upper floors are utilised as offices, storage and ancillary accommodation.

Much of the appeal is in its 14.5m of frontage on to Henry Street and a further 12m return on to Moore Street. Retail investments on Henry Street and the adjoining Mary Street are in constant demand from property funds.

In September 2014, Irish Life put down a marker when it settled for an income yield of 3.95 per cent after outbidding several funds to buy four adjoining buildings at 18-21 Henry Street for €34 million.

Nine months after the big purchase, Irish Life was back in the market again, buying two further buildings at 51 and 52 Henry Street as part of the €154 million Sovereign portfolio.

Last October, a resurgent Friends First fund was the centre of attention when it bought the telecoms shop occupied by 3 at 35 Henry Street for €9.5 million – a figure that will show an income yield of 4.2 per cent.

1 ‘No demand... because there are no people’ at well-known Dublin pub
2 Facebook agrees Irish wind-farm deal with Brookfield in Tipperary
3 Buying a second home now that we work from home
4 UK criticised for ‘unforced errors’ on post-Brexit trade deals
5 Ireland v the rest of the world: Do we pay too much tax?
6 Oura ring: Wearable device that tracks activity and vital statistics
7 Wirecard was looted before collapse, German prosecutors suspect
8 Face masks developed in Ireland could help meat-plant workers
9 Billie Jean King, Sheryl Sandberg and others on how to close the gender pay gap
10 ‘It’s not about beating the life out of a price for the sake of it’
Real news has value SUBSCRIBE